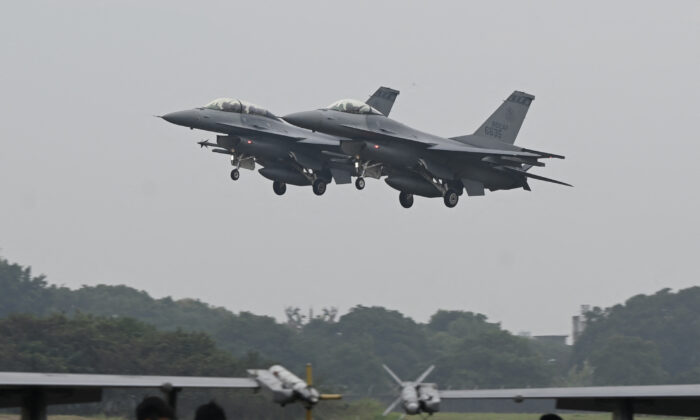 A majority of Americans from both political parties believes the United States should militarily assist Taiwan in the event that it’s invaded by mainland China, according to a new poll.

The Trafalgar Group/Convention of States poll demonstrates a growing resolve among voters to see that the self-governed island maintains its de facto independence in the face of increasing aggression from the communist regime in Beijing.

Bipartisan Support for Defense of Taiwan

Roughly 58 percent of the 1,081 likely voters surveyed in mid-January believed the Biden administration ought to commit U.S. military assets to defend Taiwan from invasion.

This belief was held regardless of party; 56.2 percent of Democrats, 57.4 percent of independents, and 60.8 percent of Republicans supported U.S. military support of Taiwan.

The poll was conducted by the Trafalgar Group, a polling and survey service that previously gained notoriety for correctly predicting the results of the 2016 presidential election.

The data presents a significant development in the evolution of public perception concerning Taiwan and the Chinese Communist Party (CCP) among American voters.

As recently as August 2021, for example, nearly half of all Americans were even opposed to selling military equipment to Taiwan, much less defending it in a war, according to a poll conducted by the Chicago Council on Global Affairs.

“Our leaders often forget that the American people have great wisdom in understanding the nature of threats abroad,” said Mark Meckler, president of Convention of States Action, a conservative nonprofit that partnered with Trafalgar on the poll.

“Voters in all parties stand squarely behind a U.S. military defense of a free and democratic Taiwan, even though that comes with great risk—and potentially a high cost to our nation—against the growing threat from China.”

Anxiety over a potential war for Taiwan has grown in recent years, as the CCP has reiterated its ambition to unite the island territory with the mainland, by force if necessary, and has engaged in an unprecedented military buildup.

Taiwan has been self-governed since 1949 when it split from the mainland following the victory of the CCP in the Chinese Civil War. Though the island is effectively independent, the CCP still considers it as part of its own territory.

The United States maintains unofficial diplomatic relations with Taiwan under a framework set out under the Taiwan Relations Act of 1979. The legislation obliges the U.S. administration to provide Taiwan with the means to defend itself.

Beyond merely enabling self-defense, however, the U.S.–Taiwan relationship is trickier. The U.S. government has, to date, maintained a policy of so-called strategic ambiguity regarding its commitments to the defense of Taiwan. This means it will neither confirm nor deny that it would directly intervene in a military conflict.

President Joe Biden said in October 2021 that the United States had a “commitment” to defend Taiwan from CCP invasion, but the administration later walked back the comments.

This state of affairs has become increasingly important in recent years, as CCP leader Xi Jinping has vowed that the “reunification” of Taiwan with the mainland would “definitely be realized.”

To that end, the CCP is engaged in a massive campaign to enlarge and modernize its military, and much of that development appears directed at either capturing Taiwan or ejecting the United States from the Indo-Pacific.

The PLA, meanwhile, has been busy preparing a massive naval fleet. The nation boasts the largest navy in the world, and launched a new aircraft carrier and frigate in recent months to bolster its warfighting capabilities against great power adversaries.

Notably, the CCP has taken to using giant mock-ups of U.S. vessels as missile targets in training exercises and has conducted amphibious assault drills across the Taiwan Strait, provoking fear that it might seize an outlying island of Taiwan.

Chinese generals have debated attacking Taiwan, according to a Taiwanese official, while the regime has developed a force capable of forming a blockade on Taiwan’s ports, thereby preventing the United States from providing material assistance to the island.

The PLA has also consistently escalated military pressure on Taiwan over the past two years through a campaign of intimidation.

Each such incursion requires the Taiwan military to scramble fighters and respond in kind. The strain on material and psychological resources has led to so-called crisis fatigue among Taiwan’s pilots and military commanders.

The United States, meanwhile, has responded by expanding its footprint in the Indo-Pacific, seeking new bases and defense agreements such as AUKUS, which will furnish the Australian defense forces with several nuclear-powered submarines.

Taiwanese leadership, for its part, has maintained a stalwart sense of defiance in the face of rising Chinese aggression.

In October 2021, Taiwan President Tsai Ing-wen swore that the self-governed island would defend itself and its “free and democratic way of life” from CCP aggression at all costs.