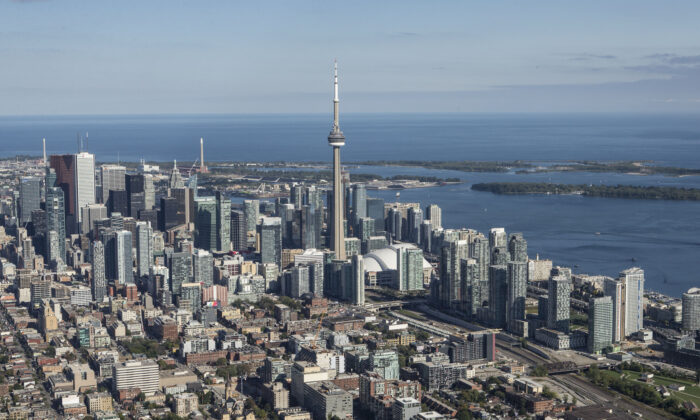 Most downtown Toronto workers say they are comfortable returning to on-site work, according to a new survey.

The survey released Tuesday by research company Nanos says 64 percent of downtown Toronto workers are comfortable going back to work in the downtown area. Fifteen percent expressed feeling uncomfortable, and another 19 percent said they felt neutral about it, while 2 percent said they are unsure.

In order to return to work feeling comfortable, respondents said it is important for them to know their workplace is safe from a public health perspective. They also want their employers to tell them in advance what is and not expected of them while onsite.

Nearly half of the respondents rated the public health authorities as their preferred source of information on going back to work downtown, according to the survey. While 29 percent prefer to hear it from their employers, followed by 20 percent from the City of Toronto.

In all, 506 downtown workers participated in an online survey between the period of Jan. 29 and Feb. 5, 2021.  To be eligible, respondents must be either working full-time, part-time, or temporarily laid off due to the pandemic and work or worked in downtown Toronto defined as between Bloor and the Lake and Jarvis to Spadina, said Nanos, which conducted the survey on behalf of the Toronto Region Board of Trade (BOT), a commerce chamber in the city.

President and CEO of BOT Jan De Silva told the Toronto Star that her group wants the public to know they are working with the public health authorities to prepare a safe path back to work in the downtown area.

“Public health needs to deal with the health crisis but we can deal with retrofitting our urban environment to enable us, when the time is right, to put protocols in place that would be helpful as we’re going through the vaccination period to try to get back to a more normal environment,” De Silva said.

“It’s the fatigue of this non-stop virtual world, of not being as productive as you can be if you can just get into a meeting face to face and work things through. You really need to schedule everyone now.”

In addition, remote work has also resulted in longer working hours, according to a survey published in November 2020 by global human resource consulting firm Robert Half.

“More than half (55 percent) of professionals who transitioned to a remote setup as a result of the pandemic said they work on the weekend. In addition, one-third (34 percent) of remote employees reported regularly putting in more than eight hours a day,” according to the survey.

Among the five Canadian cities surveyed, Toronto ranked second (60 percent) in the highest percentage of remote workers working during weekends, behind Calgary (65 percent), and ahead of Ottawa (56 percent).

“Despite the significant benefits of working remotely, such as saving time spent commuting and increased flexibility, it can also lead to putting in longer hours,” said David King, Canadian senior district president of Robert Half.

“Heavier workloads have become a reality for many professionals during the pandemic, making it more challenging to disconnect while at home. It is critical that employers encourage their teams to take regular breaks and prioritize themselves and their wellbeing.”