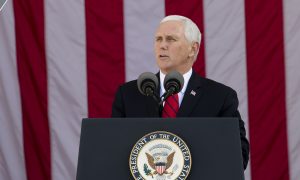 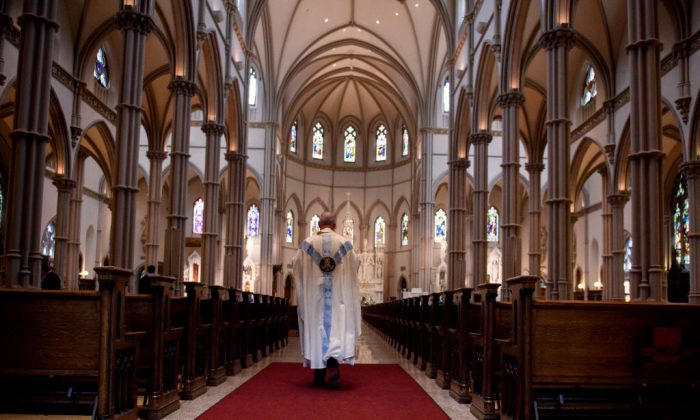 Father Kris Stubna walks to the sanctuary following a mass to celebrate the Assumption of the Blessed Virgin Mary at St Paul Cathedral, the mother church of the Pittsburgh Diocese in Pittsburgh, Pennsylvania, on Aug., 2018. (Jeff Swensen/Getty Images)
US News

A majority of Americans say that individuals or religious organizations should be free to practice their religion or make decisions based on their religious values without government interference, a new Becket study has found.

The Becket Fund for Religious Liberty, a non-profit organization and law firm defending religious rights, released a study called the Religious Freedom Index on Wednesday that tracks the trends to help understand the perspectives on religious freedom across the nation. The new study that began this year surveyed 1,000 American adults across the country online between mid-September and mid-October.

One of the key findings of the study was that 87 percent of Americans support the freedom for individuals to practice their religion in their daily life without facing discrimination or harm from others. It also found that 70 percent of people support freedom of religious groups or organizations to make their own decisions on hiring and leadership without government interference, and 74 percent of Americans say that individuals should be free to believe marriage is a union between and man and a woman without facing discrimination from the government.

This comes during a time where conflicts over religious freedom have entered the public consciousness due to coverage in the media or discussions in public debates. Religious values that were traditionally the bedrock of American families are repeatedly seen challenged in courts, or through government programs or rules that force religious individuals to make a choice between their faith or not being penalized.

Multiple senior officials in the Trump administration have also expressed their concerns about the growing hostility towards religious belief. Attorney General William Barr warned about it in a speech earlier this year, saying that a secularist movement is using different entities in society, such as legal institutions, to push out religious beliefs and traditional norms.

Similarly, Vice President Mike Pence said in a speech on Nov. 12 that the Trump administration would stand for freedom of religion with faith-based organizations when it reversed a rule that penalized faith-based adoption providers for not servicing LGBTQ families.

“After years of religious freedom being pushed to the center of polarizing debates, rather than reveal a partisan 50-50 split, the Index scored in the upper third on the scale of favorability toward religious liberty,” the study reported. “Across dimensions, we saw public support well above 70 percent on many issues, indicating that the concept of religious freedom maintains its place as a core American cultural value.

“And yet, the level of news coverage, discussion, and policy efforts surrounding religious freedom indicate that it sits at a historical inflection point,” it added.

Caleb Lyman, the director of research at Becket, told The Epoch Times in an email that along with indications that there is broad support for religious freedom, the study also found that 71 percent of respondents said they think acts of religious discrimination occur at least a few times a year.

“So we see broad support for religious freedom and also indications that there is work to be done to protect those freedoms for religious individuals and organizations,” he said.

Lyman also said he was most surprised to see how supporting respondents were for a culture of accommodation for a wide range of religious practices.

Lyman said he believes the index is potentially powerful because it covers a broad spectrum of religious freedom issues that interact with so many aspects of culture and people’s daily lives.

“By asking the same questions each year, we’ll be able to track these trends over time and hopefully get a chance to see both how religious freedom influences and reacts to broader cultural trends,” he said.

According to a 2016 Gallup poll, 79.1 percent of Americans identify with a religion, with a majority identifying as Christian, while about 21 percent identify as not having a formal religious identity or did not give a response.