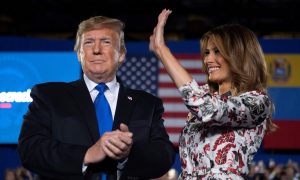 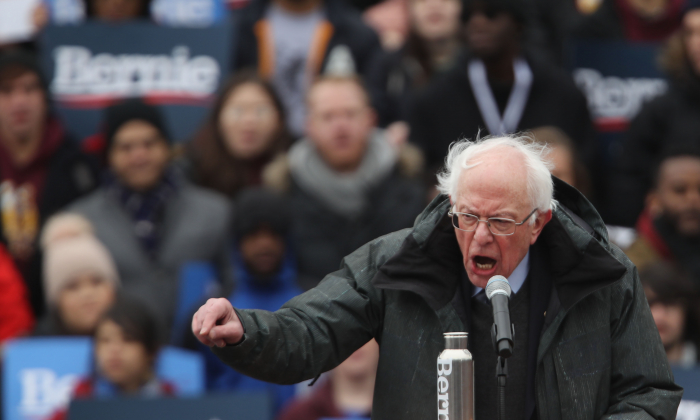 The majority of American adults prefer not to live in a socialist country, according to a Harris poll released exclusively to Axios on March 10.

Almost 63 percent of adults and more than 50 percent of young Americans disagreed when asked if they “prefer living in a socialist country.”

The results of the poll are significant because the 2020 election is shaping up to be a referendum on socialism. The leading Democratic candidates have largely embraced the socialist policies long advocated by socialist Sen. Bernie Sanders (I-Vt.). Meanwhile, President Donald Trump and Republicans denounce socialism as a failed and destructive ideology.

“America will never be a socialist country,” Trump said during the State of the Union address in February.

Notably, while most Americans don’t want to live in a socialist country, the majority still approve of socialist policies. Two out of three adults surveyed agreed that the government “should provide universal health care” and 56 percent said the government should provide “tuition-free college.” Sanders has embraced these two socialist policies for years, while several leading Democratic candidates have made them part of their 2020 platform.

“Those ideas that we talked about four years ago that seemed so very radical at that time. Well, today, virtually all of those ideas are supported by a majority of the American people and have overwhelming support from Democrats and independents,” Sanders said at a rally in New Hampshire on March 10. “They’re ideas that Democratic candidates all across the board are supporting.”

Young Americans showed stronger support for socialism, universal health care, and tuition-free college than the general population, the poll found. The trend is significant because millennials and Generation Z will make up 37 percent of the electorate in 2020, according to Pew Research.

While backing socialist policies, a number of the Democratic 2020 candidates have attempted to distance themselves from the socialist label. Sens. Elizabeth Warren (D-Mass.), Kamala Harris (D-Calif.), Amy Klobuchar (D-Minn.), Cory Booker (D-N.J.), and Kirsten Gillibrand (D-N.Y.) all have said that they aren’t socialists.

The same candidates have nevertheless co-sponsored the Green New Deal, one of the most radical socialist proposals to come before Congress in years. The program could cost as much as $93 trillion over 10 years, according to the American Action Forum. The Green New Deal’s immense price tag would quadruple the tax burden on American citizens, costing $650,000 per household.

The Green New Deal (pdf) calls for a Soviet Union-like “10-year national mobilization,” which would replace or rebuild every house in America, take all gas-engine cars off the road in favor of electric vehicles, and shift the entire U.S. economy away from fossil fuels. The deal also promises jobs, food, and education to all Americans.

In addition to the staggering price tag, the Green New Deal would achieve socialism’s primary goal of government expansion into Americans’ private lives and property, since replacing every building and every car would have to be mandated and enforced.

“The Green New Deal is clearly very expensive. Its further expansion of the federal government’s role in some of the most basic decisions of daily life, however, would likely have a more lasting and damaging impact than its enormous price tag,” the American Action Forum wrote in its analysis.

“I’m concerned that our increasing fractious political process, particularly with respect to federal spending, is threatening our ability to properly defend our nation both in the short term and especially in the long term,” Coats said on Feb. 13.

“The failure to address our long-term fiscal situation has increased the national debt to over $20 trillion and growing. I would urge all of us to recognize the need to address this challenge and to take action as soon as possible before a fiscal crisis occurs that truly undermines our ability to ensure our national security.”