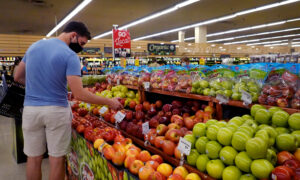 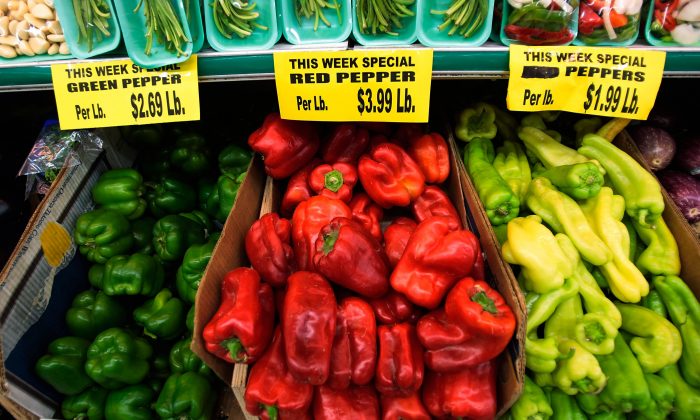 Prices for produce are displayed at a grocery store in Manhattan's Lower East Side in New York City on July 16, 2008. (Chris Hondros/Getty Images)
Economy

A majority of Americans are concerned that President Joe Biden‘s funding priorities will lead to inflation, according to a Monmouth University poll released on June 16.

A total of 71 percent of respondents said they were either very or somewhat concerned about inflation because of the current administration’s spending plans.

“A central economic criticism of Biden’s plans is that the spending will lead to spiraling inflation,” Monmouth stated in its report. “Those who are at least somewhat concerned about prices rising due to the proposed spending include majorities of Republicans (93%), independents (70%), and Democrats (55%).”

Larry Summers, an economist and former adviser to the Obama administration, in April criticized the Biden administration’s spending levels as irresponsible and likely lead to inflation.

Biden’s proposed $6 trillion in spending combines the $2.3 trillion American Jobs Plan and the $1.8 trillion American Families Plan, along with some $1.5 trillion in discretionary spending for fiscal year 2022, and other mandatory spending programs. The blueprint maps out some $4.17 trillion in revenue, projecting a $1.84 trillion deficit—a sharp drop from the past two years because of the COVID-19 pandemic—but up from 2019’s $984 billion.

Biden’s budget also calls for around $2 trillion in corporate tax increases—including a boost from 21 percent to 28 percent in the corporate rate—and restoring the top individual tax bracket from 37 percent to 39.6 percent. Capital gains taxes would rise for wealthier investors, and inherited capital gains would no longer be tax-free.

Young made the remarks while testifying at a Senate Budget Committee hearing on Biden’s fiscal year 2022 budget proposal, which calls for a sharp ramp-up of non-defense domestic spending while raising taxes on corporations and the wealthiest Americans and boosting IRS enforcement to crack down on tax evasion.

While Democrat lawmakers generally support the trillions in new spending, Republicans have been fiercely opposed to Biden’s costly proposals.

“White House budget proposals are often quickly-forgotten messaging documents. But this year, Democrats are threatening to completely bypass Senate committees, short-circuit the legislative process, and unilaterally force this radical vision onto the American people as is,” he said.