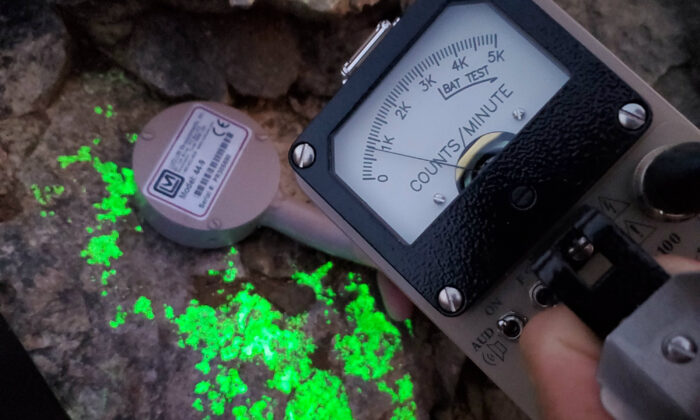 A uranium sample from a critical mineral deposit glows under blacklight as a a gieger counter measures its radiation in San Bernardino County, Calif., in a file photo. (Courtesy of Sundown Resources)
By Brad Jones

A massive mineral deposit in San Bernardino County, California, might yield $2.5 billion in uranium alone, enough to supply the nation’s needs for the next 16 years, according to the miners who own the claim.

Aside from uranium, the deposit is rich in 14 other critical minerals—including many rare-earth elements (REEs)—said Ron Kliewer, one of five miners who own Sundown Resources, a privately held California-based company.

These minerals and REEs are needed to build military weapons and defense systems as well as to develop many other high-tech products on the commercial market. They are used in everything from smart phones to computers to missile guidance systems.

President Donald Trump’s 2021 proposed budget, released Feb. 10, calls for uranium purchases of $150 million, an amount that miners expect Trump to extend to $1.5 billion over the next decade. The idea is to make the U.S. nuclear energy industry independent of imported uranium from Russia and other countries.

The uranium deposit in San Bernardino was first discovered about 70 years ago, during the uranium boom after World War II and at the dawn of the nuclear age. But the price of uranium dropped before the family who owned the claim could get mining companies to start extracting it,  and the family’s dreams were dashed.

In 2017, the family officially released the claim. That prompted one of Kliewer’s partners, Chad Gretzner, to talk to the son of one of the original claim owners, a man now in his 80s.

That man, Richard Higginbotham—now one of the co-owners of Sundown Resources—is poised to realize his family’s forgotten dream.

“It’s a lost mine story—a rediscovery,” Kliewer said. “It doesn’t seem real. It’s one of those sounds-too-good-to-be-true stories. It sounds unbelievable, so we try to be very conservative in our estimate and we have geologist reports and assays to prove it.”

While the site is estimated to hold 98 million pounds of U308 uranium and may be more than three times that big, more modern geological exploration and verification is needed to determine the exact size of the deposit, Kliewer said.

“We are in talks with several uranium mining companies. It’s very early in the process,” Kliewer said. “One of the uranium companies wants some samples to run through their patented refining process just to see what it’s going to take to refine the ore.”

The mine consists of both lode and placer claims, and also contains precious metals such as gold and silver, he added.

Gretzner said the uranium deposit was initially spotted in an aerial survey in the early 1950s, followed by ground surveys and sampling. Over the years, two mining engineers and three geologists have done reports on the mine, which Sundown claims is the largest known uranium deposit in the state.

“It was one of the best-kept secrets,” he said.

Gretzner was the first of the new claim owners to get out in the field and prospect the old mining site. He found some boxes of old documents buried in the back of the original claim-owner’s garage. It was only then that he fully realized the potential wealth of their investment.

“Surface assaying was done and the previous owners got some companies to do some test drilling. They were able to demonstrate a reserve in 1968 at 16 million pounds of uranium of ‘probable reserves,’ which is the second-to-the-highest reserve status you can have. The next status is ‘proven reserves,’” Gretzner said.

And later studies by prominent geologist Doug Litchfield confirmed the magnitude of the find was even bigger than originally thought.

Some of the minerals listed in historical and current assays are: vanadium, cobalt, lithium, yttrium, germanium, magnesium, manganese, neodymium, rubidium, thorium, and lanthanum.

Sundown Resources is currently seeking outside expertise about the best way to mine and separate the uranium from the other REEs, Gretzner said.

“No two REE mines are so alike that they can use the same leaching method,” he said.

When asked how they felt about striking it rich, both men laughed.

“When you start to run the numbers, you get that kind of deer-in-the-headlights look in your eyes. Who knows? I think we have a long road ahead of us still,” Gretzner said.

Kliewer added: “It’s not like we have a lottery ticket and we can go cash it in. It means a lot more work, and we’ll have to put more money into the operation before it can pay out.”

Correction: This article has been updated to correct the classification of the minerals strontium and zirconium. The Epoch Times regrets the error.