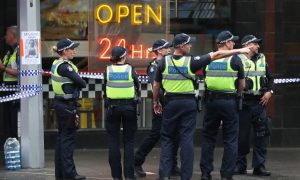 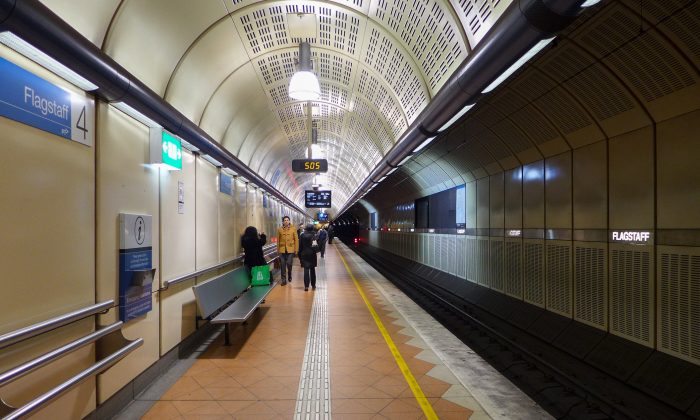 Heavily-armed police were called in to investigate reports of a potential shooter after a passenger mistakenly confused a busker’s instrument bag with a gun bag in downtown Melbourne, Australia, on March 28.

The musician had been on the way to play his guitar in the central business district when the Flagstaff train station was suddenly shut down during the morning peak hour commute.

Victoria Police is responding to an incident at Flagstaff Train Station.

Police are currently moving passengers away from the area and ask everyone to please avoid the station for now.

Critical incident police then raided the station and quickly evacuated all passengers at about 8.30 a.m. local time, forcing distressed crowds to postpone their plans and race out of the underground platforms.

Construction worker Shannon Marrell was one of the many who seemed to be shaken as he run out of the station just before police stormed onto the platform.

“I heard on the train that they had to duck, like they wanted everyone down,” he told the Australian Associated Press.

Fellow passenger Paddy Naughtin was on the 8:19 a.m. train heading to the northern Melbourne suburb of Mernda when the locomotive stopped.

“A dozen cops came running past,” Naughtin said, adding that half had been heavily armed.

When police finally approached the man, they realised he was only carrying a sports duffel bag that looked “nothing like” a gun bag. Police spoke with the man for about 20 minutes and confirmed he was not actually carrying a weapon before the train station was opened again. They confirmed that there had been no threat to the community.

“He was a local busker who was there to play an instrument in town,” Victoria Police Inspector Jacob Bugeja said at a press conference. “There was a bag that the person was carrying and he had his tools to busk with him.”

Police will continue to investigate the incident, however at this time there is no ongoing threat to the community.

Police will remain in the area today to speak with any members of the public who may have concerns.

When asked why the passengers had reported the busker, police explained that the man had aroused suspicion because he was doing breathing exercises on the train.

Police Chief Commissioner Graham Ashton defended the evacuation as a safety precaution as members of the public really believed they saw a rifle case.

“We’re concerned there might’ve been someone with a firearm on a train this morning heading in towards the city loop,” he told 3AW radio. “We’ve stopped the train at Flagstaff and the critical incident response members conducted a search of the train and were after that … content there was no firearm on the train, so they’ve given the all clear for those trains to resume.”

LATEST 9.30AM: Police responded to reports a man was allegedly carrying a firearm bag on a train at Flagstaff this morning.

Police evacuated the train and Flagstaff Station about 8.30am.

The area was searched and has now been cleared by police. pic.twitter.com/XcHLJYqx07

Ashton plans to investigate why the train driver informed passengers there was a gunman travelling across the rail network without confirmation.

“We have to be really careful about the sort of communications that are put out and when they’re put out. You don’t want people to be reacting in a way that might put their safety at risk,” he said. “Fortunately, people are able to get back on their way. We’re sorry for the interruption but we had to obviously take action quickly and the critical incident response team did respond quickly.”

Police have made enquiries to the government-funded heavy rail operator Metro Trains.

Police have reviewed CCTV footage in relation to the earlier incident at Flagstaff today. No offence was detected and there will be no further police action. pic.twitter.com/PxrXPdEmnA