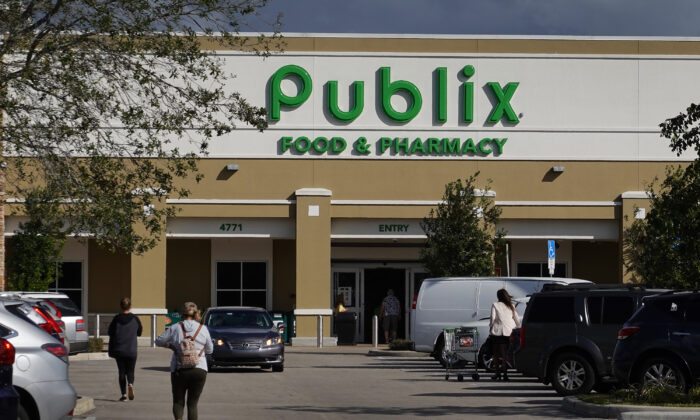 A Publix Food & Pharmacy store where COVID-19 vaccinations were being administered is seen in Delray Beach, Fla., on Jan. 29, 2021. (Joe Raedle/Getty Images)
US News

Florida-based supermarket chain Publix said Tuesday that it will not provide COVID-19 vaccines for children under the age of 5 after authorizations were handed down by federal health agencies.

The company’s website says that it will provide COVID-19 vaccines for children aged 5 and older. Publix’s pharmacies are still offering influenza vaccines and other, traditional vaccines for young children, according to its website.

The Epoch Times has contacted Publix, which has the majority of its stores in Florida, for comment.

A spokesperson for CVS told Fox News that the company will offer vaccines for children younger than 5, while Walgreens told Fox 13 in Tampa Bay that children ages 3 and older can receive the vaccine across the United States, including in Florida.

And a spokesperson for Walmart told the Tampa Bay Times that it will give vaccines to kids aged 4 and older.

“While we expect the majority of these vaccines to be distributed to pediatric providers, we plan to administer authorized vaccines for ages 3–5 as supply as distribution allows,” said Walmart spokesperson Tyler Thomason.

Last week, both the U.S. Food and Drug Administration (FDA) and the Centers for Disease Control and Prevention (CDC) handed down an emergency authorization to give Pfizer’s and Moderna’s mRNA vaccines to children aged 6 months and older. The agencies in October 2021 similarly approved an emergency use authorization for Pfizer’s vaccine for children aged 5 to 11 years of age, although federal data suggests that only about 29 percent of children in that age group are fully vaccinated.

Publix’s decision comes as Florida Gov. Ron DeSantis’s administration said that health officials in Florida will not be ordering COVID-19 vaccines for small children after the emergency approvals were given.

“Florida is not placing any orders of COVID shots for zero to 5-year-old babies and kids,” DeSantis spokeswoman Christina Pushaw posted on Twitter. “What they have couched as a reversal is actually the governor’s steadfast position that … Florida does not recommend, nor distribute, shots for babies. Health care providers that want the vaccines can obtain them and any parent who wants it for their child can get it.”

And during an event several days later, DeSantis told a crowd on June 20 that his government doesn’t recommend shots for small children.

“We recommend against [vaccinating babies],” the Republican governor told the crowd. “We are not going to have any program where we’re trying to jab 6-month-old babies with mRNA. That’s just the reality.”

“We recommended against COVID-19 vax for healthy children in March [because] there was no strong evidence of benefit. This remains the same for healthy kids [under] 5,” he wrote on Twitter. “Providers have always been able to order vaccines. This never changed.”