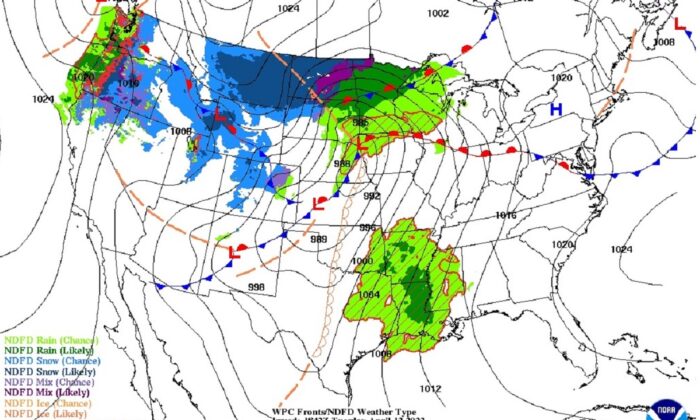 Weather map of a major winter storm bringing heavy snow and blizzard conditions to parts of the U.S. Northern Plains through April 12, 2022. (NOAA/Screenshot via The Epoch Times)
Regional News

Tornado watches covered states from Texas and Iowa to Minnesota on Tuesday evening.

There were reports of hailstones nearly 6 inches in length in Salado.

The weather service is expected to make assessments of damage in the coming days.

The National Weather Service Storm Prediction Center on Wednesday issued level 4 out of 5 “moderate risk” of severe weather across the Mississippi Valley, noting “the potential for strong tornadoes and very large hail.”

“Heavy snow and blizzard conditions will continue in parts of the Northern Plains. Severe thunderstorms capable of producing damaging wind gusts, large hail, tornadoes, and flash flooding are possible from the Mississippi River Valley into the Midwest,” the National Weather Service said.

The warning added, “Critical fire weather conditions will continue in portions of the Southern and Central High Plains into the Southwest.”

The North Dakota Capitol and other state facilities in the Bismarck area have been shuttered, as well as scores of schools, colleges, government offices, and highways.

Gov. Doug Burgum directed the state closures, noting that the Emergency Operations Center has been activated and is coordinating with partners and local emergency managers statewide to ensure that resources, including search and rescue, are available.

Up to two feet of snow is forecast through Thursday in the area. Locally, higher amounts up to 30 inches are possible.

The blizzard warning extended into eastern Montana and the northwestern corner of South Dakota. Several schools were closed in both states.