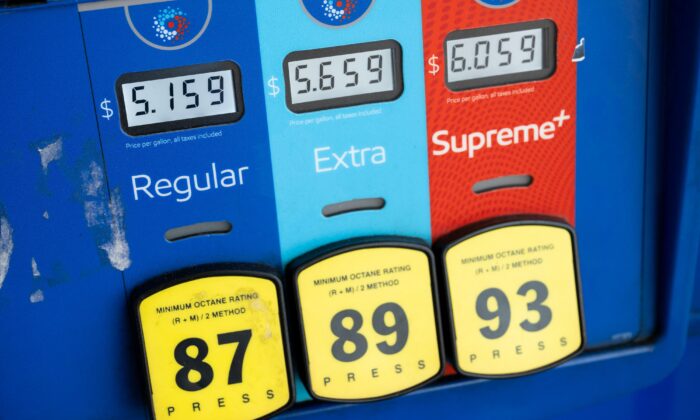 A gas pump displays the price of fuel at a gas station in McLean, Va., on June 10, 2022. (Saul Loeb/AFP via Getty Images)
Economy

The only thing that could curb the current record-high gasoline prices would be a major drop in demand, i.e. a recession, according to several experts. Theoretically, a major shift in U.S. foreign and energy policy could make a difference too, but nobody seems to realistically expect that to happen.

Gas prices have particularly pained Americans, climbing in recent months to more than $5 a gallon. Some experts even consider it the driver of price inflation, which hit a four-decade high of 8.6 percent in May. The price hike has been caused by several factors piling up, including currency inflation, anti-carbon policy moves, misjudging the impact of the COVID-19 pandemic, and Russia’s invasion of Ukraine.

“We’ve made a lot of policy errors in this country and overseas to put us in this situation and it’s not going to be easily fixed,” commented Phil Flynn, senior analyst with The Price Futures Group.

“If we start to reverse some of those policies, the market can start pricing in a better future.”

The American Petroleum Institute, an industry group, on June 14 released a list of 10 steps the U.S. government should take to boost domestic oil production, which still lags behind pre-pandemic levels and barely budged for half a year now. Top of the list is restarting drilling leases on federal land and speeding up project approvals.

But since the Biden administration has centered its agenda around “decarbonizing” the economy, chances of any pro-oil policy moves are expected to be nil.

The administration has been begging foreign producers, from Saudi Arabia to Venezuela, to pump out more, but with little success.

“People are estimating that global spare production capacity can be as low as 2 million barrels a day,” Flynn said, noting that “we’ve already stretched the system to the limit.”

Refineries have emerged as another bottleneck with no apparent fix in sight. Refining capacity in the United States and Europe has been declining for years under the mantra of moving away from fossil fuels. Meanwhile, as the COVID-19 pandemic hit in 2020 and governments locked down large swaths of the economy and population, oil prices collapsed and the industry was stuck with massive excess capacity. The prospects at the time were deary. Not only was there no end of the pandemic in sight, but financial elites openly discussed using the crisis as an opportunity to move away from oil. Especially in the financial sector, the “environment, social, governance” (ESG) initiatives went into overdrive, promising to starve the oil industry of capital. Investment prospects in the industry took a severe hit.

“We had people predicting that oil demand would never get to pre-pandemic levels,” Flynn told The Epoch Times.

As it turned out, the pandemic didn’t cripple the economy quite as severely as expected. Many U.S. states quickly started lifting the lockdowns and by the end of the year just about returned to normal. The vaccine was delivered before the end of the year, allowing reopening even in most areas that were previously reluctant to do so. Demand quickly bounced back and so did the oil market.

To attract investors, oil companies adopted a strategy of “efficiency”—cut costs, cut development, and instead send their profits to stockholders. The strategy has somewhat worked, but only at the expense of future production and processing capacity.

The Biden administration has recently blamed refineries and oil companies for profiting from the high oil prices, which have been hovering around $120 a barrel for the past few days—more than double from a year ago.

But some experts have argued that it’s been the excessive government spending and the subsequent money printing by the Federal Reserve that has allowed the oil industry to raise prices so much without, so far, significantly affecting demand.

“The government never makes any mistakes. Have you ever noticed that,” Flynn quipped.

Excise tax on oil recently floated by the administration would be “disastrous for the economy,” he said.

The Russian invasion of Ukraine earlier this year was timed to take advantage of the tight oil supply, according to Art Berman, geologist and energy expert.

“Putin knew what he was doing,” he told Wealthion’s Adam Taggart in a recent interview, noting the Russian President has a Ph.D. in energy economics.

Oil prices rallied on concerns that Western sanctions on Russia will prevent it from selling its oil.

Such expectations haven’t materialized. European countries still buy the majority of Russian oil and China and India continue to buy too, albeit at a discount.

“They’re absolutely incapable of doing that,” he said.

The U.S. and the E.U. could also put pressure on India to stop buying.

“But they haven’t done that yet because they know, at the end of the day, if they do that, oil prices will go to $300,” Flynn said.

Russia is the world’s second-largest oil producer and it appears there’s just not enough spare capacity available to exclude it completely.

There are already examples of clever schemes to dodge the sanctions. Russia-made diesel is mixed with diesel of other origins, resulting in a product that can be shipped to Europe without restrictions, Berman said.

Berman predicted oil prices will come down significantly, but only through “demand destruction.” He argued that, historically, inflation and high gas prices in particular have caused consumers to cut back. He expects that U.S. gas and diesel consumption could drop about 10 percent in the next 12–18 months. That could lead to an oil glut and price collapse, but it could very well also mean a recession.

From an investment perspective, Lance Roberts, chief investment strategist at RIA Advisors, warned that oil rallies tend to unwind just as suddenly as they build up.

“Oil prices are all driven by commodity traders. So oil prices are somewhat supply-demand driven, but a lot of it is these non-commercial speculators in the options markets that are driving oil prices through options contracts. Right now, everybody is ramping up their oil contracts,” he said during a recent Wealthion interview.

“Well at some point, somebody says, ‘I’m out.’ … He’s like the popular guy that brings all the people to a party. Whoever that guy is, when he says, ‘I’m out,’ the rest of the herd follows him.”

Flynn doesn’t see that happening—at least not in the short term.

“Technically, most people think we’re in a recession right now, but assuming that we are, it might be a mild recession,” he said.

He expects “real demand destruction” would only come if oil climbs even further, perhaps to $150 a barrel.

Both Flynn and Berman agreed that in the longer term, oil prices will remain high.

“We can see a big correction of $30 … I think it will recover … I think it would only be a pause in the bull market,” Flynn said.

The Fed’s flurry of interest rate hikes may be the wild card that could pull the rug from under the economy more broadly.