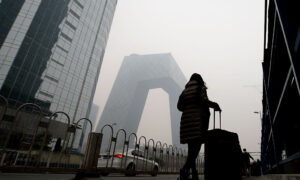 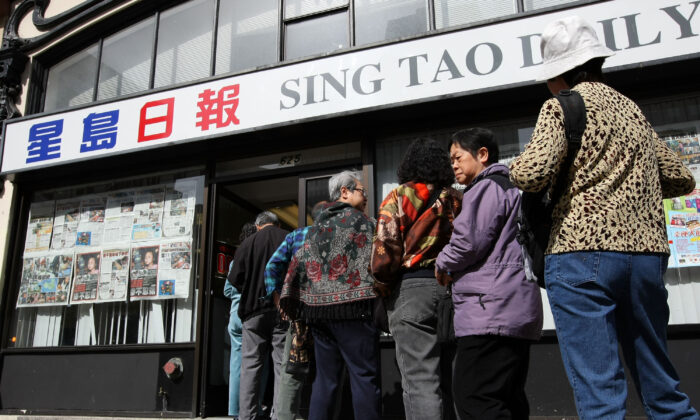 Chinese Americans line up outside of the Sing Tao News offices to donate money for the victims of the earthquake in China, in Chinatown, San Francisco, on May 14, 2008. (Justin Sullivan/Getty Images)
US-China Relations

Major Pro-Beijing Newspaper Registers as Foreign Agent in US

A major pro-Beijing newspaper has registered its U.S. subsidiary as a foreign agent after being compelled to do so by the Justice Department, as Washington steps up scrutiny of Chinese influence efforts in the United States.

Sing Tao disputed the Justice Department’s decision, stating that its U.S. entities are “similarly situated to other for-profit media companies operating in the United States,” according to an Aug. 23 filing with the department.

During the large-scale pro-democracy movement in recent years, the Hong Kong-based businessman has frequently lashed out at the city’s protesters in editorials and interviews and often blamed the local government for being too “soft” on them. Sing Tao’s Hong Kong edition also ran front-page ads echoing Beijing’s anti-protester rhetoric after police violently suppressed protesters.

In 2001, the year he took over the company, Ho entered into a joint venture with a subsidiary of Chinese state media Xinhua to form an information service platform called Xinhua Online. He sold most of his stakes in Sing Tao in June to Chinese real estate developer Kwok Hiu-ting.

A former Sing Tao staff member said Ho was a frontman for the Chinese Communist Party (CCP), which ultimately called the shots in the organization.

“To say that it’s a foreign agent is not misrepresenting it at all,” the former employee told The Epoch Times on condition of anonymity. “It’s under the CCP’s influence in many respects.”

That influence, the former employee said, includes dictating what content goes on the paper’s front page and inside pages, its editorial stance, and frontpage headline selections.

The CCP exerted control by stationing designated personnel at the publication’s office, appointing those with pro-Beijing viewpoints as editorial staff, and exerting pressure on the newspaper’s advertisement partners, the person said.

More than half of the Sing Tao U.S. content is outsourced to Star Production Limited in Shenzhen, a Chinese city bordering Hong Kong, the filings show.

Successive consul generals of the Chinese Consulate in San Francisco have attended Sing Tao’s birthday events. The most recent one, a banquet marking Sing Tao’s 83rd year, took place in early August, during which Consul General Wang Donghua repeated the CCP’s rhetoric that the United States was trying to contain a benign China, according to the consulate’s website.

Former deputy consul general for the New York Chinese Consulate Zhang Meifang in 2013 also praised Sing Tao as “a key window for Americans to have a true, comprehensive, and objective understanding of China,” and promised to provide “support within the consulate’s power” to “tell the ‘Chinese dream’ to U.S. mainstream society,” a post from the consulate’s website said.

The Justice Department declined to comment. Sing Tao didn’t respond to an inquiry from The Epoch Times by press time.