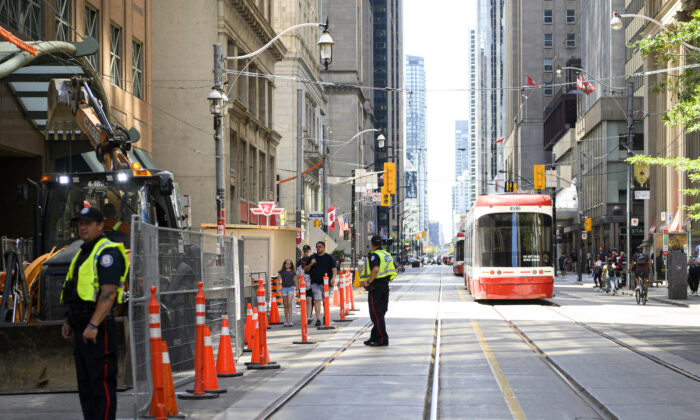 Toronto’s downtown core is experiencing a major power outage, impacting the financial district as well as businesses and the Toronto Metropolitan University’s campus.

Many businesses had to shut down on Aug. 11 due to the power outage, which impacted security as well as payment systems.

Many shops put up “closed” signs due to the outage, and traffic slowed to a crawl with traffic lights out of service.

Some of the major companies and organizations, including Toronto’s main stock exchange, were able to continue operations, thanks to backup power.

Hydro One says the outage is related to the transmission system and that it is still investigating the issue. It also said the outage has impacted around 10,000 customers.

The company first issued a statement on social media at around 12:50 p.m., saying that the outage is impacting Toronto Hydro and its customers in the downtown core.

“We’re investigating reports that a barge carrying a crane came into contact with high-voltage transmission lines in the Port Lands area. We continue to try and reroute power to bring @TorontoHydro customers back as safely and quickly as possible,” said the company in an update at around 2 p.m.

“We know this has made today exceptionally difficult for many of you, and we appreciate your patience. We will continue to share more information as it becomes available,” the utility company said in another update.

UPDATE: Here’s a look at the transmission circuit that’s been affected. We know this has made today exceptionally difficult for many of you, and we appreciate your patience. We will continue to share more information as it becomes available. #DarkTO pic.twitter.com/Bw8uqXK06K

With traffic lights impacted, the Toronto Police Operation Centre issued a statement urging residents to treat intersections as a 4-way stop at places where traffic signal lights are out.

“Power is slowly being restored in many buildings on the TMU campus. TMU Community Safety and Security and Facilities Management and Development are monitoring the situation and will provide further direction based on guidance from Toronto Hydro,” the university said.

The university has asked all occupants of the campus, except those in the Pitman Hall and RCC buildings, to evacuate, saying that it is required because “an infrastructure danger/disruption of this nature may compromise the building’s life-safety systems (i.e. fire-detection and sprinkler systems).”

It noted that an all-clear notification will be issued once the matter is resolved.