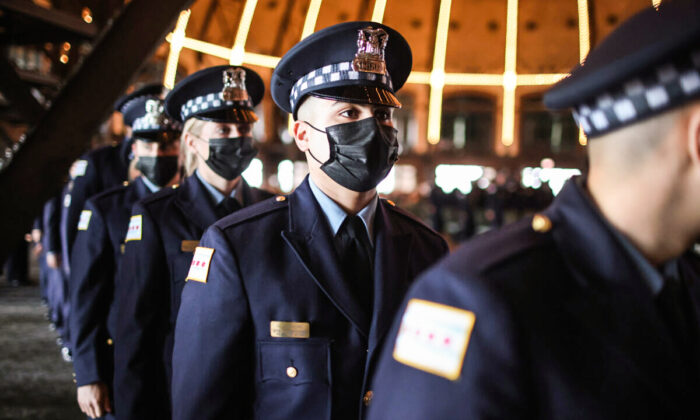 After slashing police budgets last year under intense pressure from activists, mayors of the country’s three largest cities have decided to increase funding this year, in the face of a nationwide jump in crime.

Chicago, which has the nation’s second-largest police department, is poised to pass its 2022 budget on Oct. 27. The spending plan boosts law enforcement funding by $200 million over last year’s $1.7 billion, and much of the increase will cover police salaries.

New York passed its 2022 budget in June, increasing funding for the nation’s largest police force by $200 million. Los Angeles, which has the nation’s third-largest force, raised its police budget by $50 million.

The police budget increases in these cities have largely been made possible by the historic influx of federal money under the Biden administration’s American Rescue Plan.

Last week, Chicago Mayor Lori Lightfoot drew the line at defunding the police at a time when shootings and homicides in the city were at the highest level in more than a decade.

“[Our residents] want more police—not less police. We are not a city—and will never be a city—that bows to those arguing for defunding,” Lightfoot said.

Since the death of George Floyd in May 2020, activist organizations—such as the Chicago chapter of the Democratic Socialists of America and the Black Abolitionist Network—have pushed to defund the Chicago Police Department and redirect the money to educational and social programs, with a stated end goal of abolishing the police.

Under pressure from the activists and out of a need to balance the city’s books, Lightfoot last year cut police funding by 3.6 percent, eliminating 614 police jobs and shifting $1.3 million to a mental health response program.

However, New York failed to deliver the reduction in the end, because its police force logged 77 percent more overtime than budgeted, according to the New York-based Citizens Budget Commission. Officers had to work overtime to cope with the massive protests and social unrest.

This year, Mayor Bill de Blasio has said he needed to be realistic about police funding and proposed an increase of $200 million, a large part of which goes to cover overtime payments.

Unlike Chicago or Los Angeles, NYC has seen a steady decrease in shootings and murders since last summer, according to New York Police Department data.

In Los Angeles, shootings jumped by 24 percent and homicides by 15 percent from last year. Mayor Eric Garcetti responded with 3 percent more funding for law enforcement this year to hire more officers and drive down crime.

Last year, LA cut its police budget by $150 million—through overtime reduction—and redirected the money into social services in low-income communities. But, as happened in New York, the LA force ended up logging $47 million more in overtime than budgeted, according to the Los Angeles Times.

Other major metropolitan police departments also saw budget increases for 2022. Philadelphia, which employs the nation’s fourth-largest police department, approved a $14 million increase to equip all of its officers with tasers over the next five years. In Houston, the city approved an additional $30 million for the nation’s fifth-largest police force.