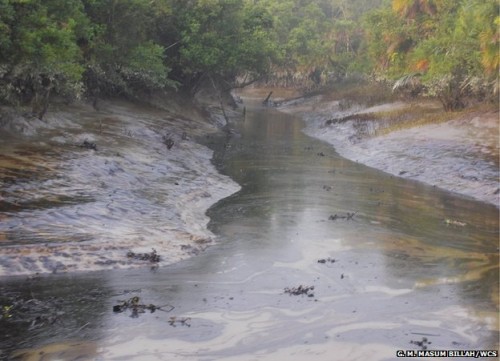 Nearly 350 tonne of oil spilled into the Sela river of the Sunderbans on Tuesday after an oil tanker collided with an empty cargo vessel in the Bangaldesh side of the mangrove forests. The spill may cross over to the Indian side of the Sunderbans, and cause serious damage to the ecosystem which is home to Royal Bengal Tigers, Olive Ridley turtles, Ganges Dolphins and other species.

Sunderbans is a World Heritage site and world’s largest mangrove forest. It is also the only mangrove ecosystem where tigers exist. Being the season of migration, many migratory birds from distant places like Siberia have come to these mangroves for wintering. Environment activists warn of a massive ecological disaster resulting from the spill, particularly in Mechua and Baghamara in the southernmost parts of the Sunderban delta where individual rivers meet the sea.

Latest report informs that the oil spill has spread over an estimated 80 square Kilometer area in the Bangladesh side of the Sunderbans. The site, near Mongla port, is about 100km from the Kolkata port and given  the crisscrossing way the tributaries and streams are distributed here, it can easily spread to a wider area including part of the forest in India and jeopardizing the lives of a large number of species. The Sunderban forest is a contiguous and fragile ecosystem spread over 26,000 square Kilometer in both countries.

The biggest risk is damage to the ecologically sensitive coral reef area in St. Martin’s island and also health risks to the river dolphins. The accident took place in one of the three dolphin sanctuaries in the area, which is a no-go zone for vessels.

Dolphins come to the surface to breathe every few minutes. But with the thick layer of oil on the surface, it would be difficult to come out. Also, the layer would cut down the amount of oxygen dissolved in the water, making it hard for all aquatic animals breathe.

The coastal mangrove goes under water twice a day in high tide. Once the water recedes, a thick layer of oil will cover the vegetation and rinse into the soil. Deer survive on this vegetation and tigers feed on them. In the long run, all animals in the food chain could suffer because of the spill.

This infographic by the Dhaka Tribune looks at the major adverse effects of the oil spill on the ecosystem,

Last September, UNESCO had written to the Bangladesh government seeking suspension of the water route through the Sunderbans immediately and asked the government to send a compliance report by February. The UNESCO had threatened to withdraw its world heritage site tag and list the Sunderabans as endangered world heritage site instead, said a source.

“Though it is too early to say anything, I must confess that I could not spot any fish or dolphins in the area,” said Ali.

“The dolphin sanctuary will probably be the worst-hit. But, we have to carry out an inspection on the extent of the damage. Small birds that feed on insects and fish, too, will be affected,” said Ali.

“Trees along the coastal belt may die soon if the spill is not restricted immediately,” said a wildlife activist.

Local villagers are complaining of the slick spreading quickly in the area because of the branching streams. They say ducks have been found dead and there is a strong odour coming from the waters.

Apart from the forest department officials, Border Security Force and Coast Guard have been asked to keep a watch, particularly along Harinbhanga River and Raimangal where Indian Sunderbans merges into Bangladesh.

The Sunderban mangrove ecosystem is fragile and very sensitive. It is already on the receiving end of many challenges including rising sea level due to global warming, fragmentation of the forest and vulnerability due to rise in human population. The latest oil spill if not contained by a joint collaboration of India and Bangladesh, could turn into a major natural catastrophe destroying one of the most unique ecosystems on the planet. As Bangladesh has already admitted that it doesn’t have the resources to tackle a calamity of this magnitude, India has to act fast and now.

This article was written and published by Atula Gupta, the head administrator for indiasendangered.com. For more information and the original article, please click HERE.