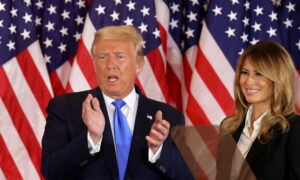 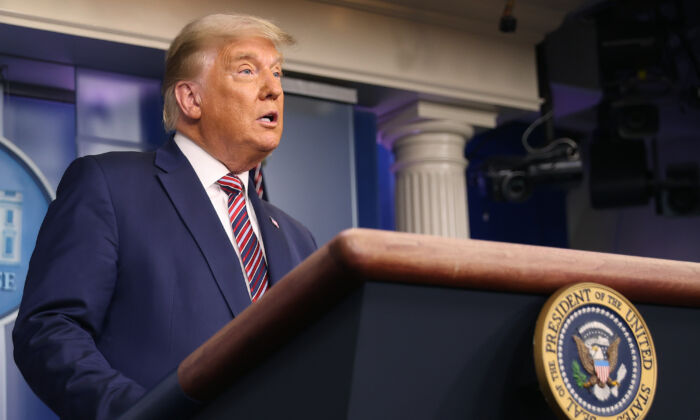 President Donald Trump speaks in the briefing room at the White House in Washington, on Nov. 5, 2020. (Chip Somodevilla/Getty Images)
2020 Election

Cable and broadcast networks cut away from President Donald Trump on Thursday as he spoke from the White House to claim that Democrats were trying to “steal” the presidential election from him with “illegal votes.”

Trump moved on to allege “tremendous corruption and fraud” in the Democrat-run cities such as Philadelphia and Detroit, where volunteer observers were reportedly denied closer access to ballot counting, in an effort to push his Democratic challenger, Joe Biden, to victory.

“There’s absolutely no legitimate reason why they would not want to have people watching this process, because if it’s straight they would be—they should be proud of it,” the president said. “Instead, they are trying obviously to commit fraud. And there’s no question about that.”

Multiple networks, including MSNBC, CBS News, and ABC News, cut away from Trump’s speech, with some disputing the president’s claims.

MSNBC cut away to anchor Brian Williams some 30 seconds into Trump’s speech. “Here we are again in the unusual position of not only interrupting the president of the United States but correcting the president of the United States,” Williams told viewers. “We are reluctant to step in, but duty-bound to point out, when he says ‘we did win this election, we’ve already won,’ that is not based in the facts at all.”

On CBS News, anchor Norah O’Donnell cut away to correspondent Nancy Cordes, who “fact-checked” Trump’s statement that his numbers were “getting whittled away miraculously” after Election Day, and dismissed it as “another falsehood”

ABC cut away to anchor David Muir, who asked political journalist Jon Karl to help him “discern what he’s talking about.” Karl said there was “simply no evidence that’s been presented in any of these states that there are illegal votes he is talking about.”

This isn’t the first time major networks have interrupted live broadcast of Trump’s remarks. In August, CBS News and CNN cut away from the president as he warned delegates about potential election fraud at the Republican National Convention in North Carolina.

“The only way they can take this election away from us is if this is a rigged election,” Trump told his fellow Republicans at that time. “We’re going to win.”