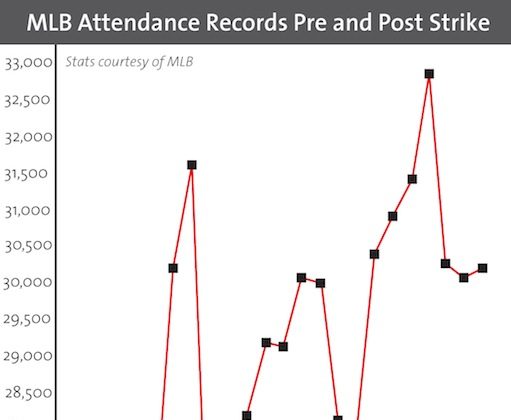 It took the league until 2007 to reach pre strike attendance levels, one of the reasons both sides worked so hard to continue the labor peace. (Diana Benedetti/Epoch Times)
Baseball

After watching the NFL and NBA go through their respective lockouts, Major League Baseball worked tirelessly with the MLB Players Association to get their new collective bargaining agreement done.

The five-year deal runs through the 2016 season, meaning 21 years of labor peace, something MLB Commissioner Bud Selig called an “historic moment,” during the live feed aired on MLB.com. He continued, “I believe this 5-year agreement will continue the remarkable popularity and surge that baseball has been on.”

The deal looked to improve the competitiveness in baseball as well as improve the game overall. Here is a look at some of the highlights:

*Competitive Balance lottery (in lieu of the Elias ranking system and “Type A and B” players)—This will allow the 10 teams with the lowest revenues and 10 smallest markets to be entered into a lottery for six draft picks after the first round. Teams who do not win a pick in that round will be entered into a lottery for six picks after the second round. While the 10 lowest-revenue teams could change from year to year, it is hard to imagine a small-market team magically becoming a big-market team or vice versa. For once, it looks like it might pay to play in Florida.

*HGH Testing—Beginning during the 2012 Spring Training, all MLB players will be subject to HGH blood testing, a first in the “big four” North American sports. There will be no testing during the season without probable cause. The 2012-2013 off-season will start random unannounced HGH testing. Both sides want to see more research before committing to in-season testing, citing the nature of playing almost every day for six months. So, if a player can stay clean during Spring Training and under the radar during the season and it looks like that player could get away with a little performance-boosting. While this is a step in the right direction, there are still loopholes. At least both sides are open to the idea of working towards in-season testing.

*Instant Replay will now include fair/foul balls and “trapped” ball plays (subject to approval by World Umpires Association)—Selig said after the press conference in an interview with MLB.com there was “very little appetite for more instant replay;” however after the bevy of blown calls in critical moments recently, that is hard to believe. Selig cited baseball as a “game of pace,” which is true. Perhaps finding a way to speed up the replay instead of allowing incorrect calls to pass to keep “pace” is the better solution.

*The prohibition of smokeless tobacco during interviews and in the clubhouse by all players, managers and coaches—All personnel will also have to conceal their tobacco products while fans are at the ballpark, including having the packages or cans on their persons.

*Additional Wild Card team in Playoffs—No timetable is set, however when Selig was asked if he felt the league would have a deal in place for the 2012 season he replied, “I am confident we will.” With Houston not going to the AL until 2013, the only problem with putting this into play next season is that the leagues would not be not even. If players can look past that for one year, this should get done.

*Salary Arbitration Eligibility—Players with two years of service who will be arbitration-eligible will be increased from the top 17% to top 22%. This allows more players to file for arbitration, something MLBPA Executive Director Michael Weiner said was a long, hard-fought victory for the players.

*Signing Bonus Pool—In an attempt to curb draft spending, MLB will tax those who exceed the “signing bonus pool.” A team’s first 10 rounds of draft picks will be assigned a value and clubs exceeding that value will be taxed 75-100% of the overage and/or forfeit of draft picks.

*Competitive Balance Tax—First time offenders: decreased to 17.5%. Once a team goes below the threshold, it will be treated as a first-time offender.

*Safer Batting Helmets—By 2013, the players will be required to wear new batting helmets which will protect against pitches thrown over 100 MPH. These will be less bulky than previous designs, so there should be less “Great Gazoo” comparisons.

*All-Star Game—If a player is voted in, he will be required to attend unless injury prevents him from playing.

*Social Media—So long to free speach on Twitter, at least without consequences.

MLBPA Executive Director Michael Weiner said of the deal, “This is a good day for baseball, not just because of what we avoided, but for what we actually achieved.” While no deal is perfect, 2011 has shown sports fans that an imperfect deal is better than a strike. Play ball.