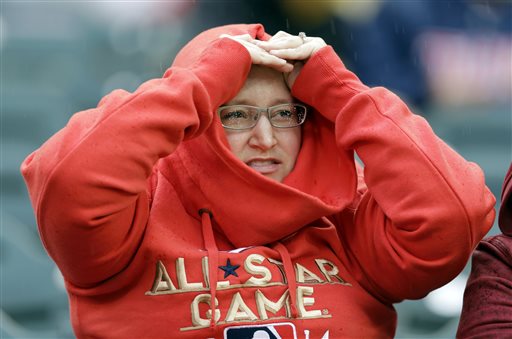 It’s being broadcast on FOX.

A live stream will be available via FOX Go.

See an Associated Press story below the photos.

MINNEAPOLIS—Mike Matheny had quite the choice for the National League’s All-Star starter.

There was his own Adam Wainwright, the St. Louis Cardinals ace with a 12-4 record and a 1.83 ERA.

And there was the Los Angeles Dodgers’ Clayton Kershaw, 11-2 with a 1.78 ERA and fresh off a 41-inning scoreless streak that ended last week.

He chose Wainwright, who will start Tuesday night at Target Field against the Seattle Mariners’ Felix Hernandez.

“It’s going to be great catching them,” said Milwaukee’s Jonathan Lucroy, the NL starter behind the plate. “A lot more fun than facing them.”

When baseball’s elite met at Citi Field last year, NL batters managed just three hits in a 3-0 loss. A year earlier in Kansas City, the AL had just six hits in an 8-0 defeat.

Never before had consecutive All-Star games ended in shutouts.

The big league batting average is at a 42-year low. Strikeouts are at an all-time high.

Wainwright and Kershaw are on track to become the first pair of qualifying pitchers in one league with a sub-2.00 ERA since the Mets’ Dwight Gooden and the Cardinals’ John Tudor in 1985 — the last time Minnesota hosted the All-Stars.

“Aside from having the ability to win two World Series with the St. Louis Cardinals, I think this has to be one of the highlights of my baseball career to this point,” Wainwright said. “One of the coolest things I can say I did is to start a big league All-Star game.”

“If I’m him, I’m probably going to pick Adam, too. It’s his guy and he had the best half,” Kershaw said.

Hernandez, the first Venezuela pitcher to start for the All-Stars, also has sterling credentials: an 11-2 record with a 2.12 ERA. He described his task pretty simply:

“Just throw zeroes out there and get my team to win. That’s all I got to do,” he said.

Back in the great pitching era of the 1960s, the game was different. Sandy Koufax, Don Drysdale, Bob Gibson and Juan Marichal expected to finish what they started.

Now, flame-throwers come out of the bullpen in the middle of games.

“You’re not getting three, four at-bats off of the starter unless you’re in trouble and you’re losing the game,” said Baltimore’s Matt Wieters, elected as a starting catcher but sidelined following elbow surgery. “I think for a while it was trying to get the starter out of the game so you can get to that fifth, sixth, seventh-inning guy. And now those fifth, sixth, seventh-inning guys are throwing upper 90s with a good breaking ball.”

In addition to pitchers, the spotlight will be on New York Yankees captain Derek Jeter. The shortstop, who turned 40 last month, is playing his final season and was selected for his 14th All-Star game.

Yankees closer Mariano Rivera got an emotional sendoff last year, the All-Stars giving him a solo bow. When Rivera entered in the eighth inning all other players left him the field to himself.

Cal Ripken Jr. was given a tribute at the start of the 2001 game at Seattle’s Safeco Field when Alex Rodriguez told Ripken just before the first pitch to switch positions and move from third base to shortstop, where the Baltimore star spent most of his career. The 40-year-old Ripken then homered in the third inning.

And two years ago, Atlanta’s Chipper Jones was feted with a standing ovation at Kauffman Stadium when he pinch hit in the sixth inning and singled.

“I don’t go into things with expectations,” he said. “I’m looking forward to playing the game. I’ve pretty much stopped it right there.”

The game is being played in Minneapolis for the third time, following the NL’s 6-5 win at Metropolitan Stadium in 1965 and a dull 6-1 NL victory indoors at the Metrodome in 1985.

Oakland, a big league-best 59-36 at the break, has seven All-Stars for the first time since 1975. It got another win on Monday night when Yoenis Cespedes beat Cincinnati’s Todd Frazier 9-1 in the final round to become the first repeat champion of the Home Run Derby since Ken Griffey Jr. in 1998 and ’99.

The Athletics have some incentive for an AL victory in the All-Star game; since 2003, the winner’s league gets to start the World Series at home, and 23 of the last 28 titles were won by teams scheduled to host four of a possible seven games.

“I don’t think you can ever underestimate the home-field advantage in a postseason,” said AL manager John Farrell, who led Boston to a six-game win over St. Louis last year. “To have that final game potentially in your home ballpark, that goes a long way to affecting the outcome.”