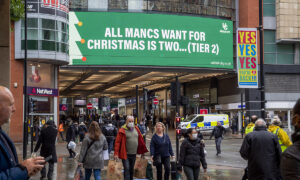 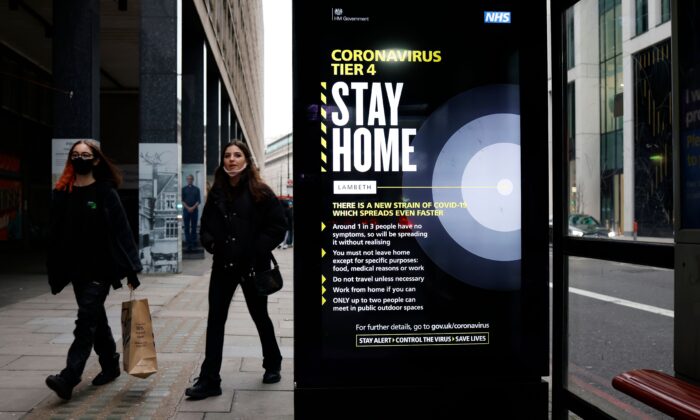 People, some wearing masks, walk past a bus stop with a government message about the CCP virus tier 4 restrictions urging people to stay home in London on Dec. 29, 2020. (Tolga Akmen/AFP via Getty Images)
UK

A “Major Incident” was declared by the county of Essex in Southeast England amid soaring cases of the CCP virus that threaten to overwhelm local health and care services.

The formal declaration was issued on Tuesday by the Essex Resilience Forum (ERF), a multi-agency partnership of local councils, emergency services, and health providers who plan for major emergencies.

It was issued in response to a “significant growing demand” on local services, the ERF said.

It said in a media release emailed to The Epoch Times that the pressure on the NHS and care services is around “critical care and bed capacity, staff sickness/self-isolation levels, and the system’s ability to discharge patients quickly into safe environments.”

It said the numbers of patients being treated for the CCP (Chinese Communist Party) virus in the county had overtaken those at the peak of the first wave in the Spring and “are likely to increase further in the coming days.”

Co-chairman of the ERF, Essex Police Chief Constable B. J. Harrington said declaring a major incident will allow the county “to seek extra government support to tackle the pressure on services.”

He urged locals to only call 999 or attend hospital Accident and Emergency departments in an emergency to “help protect the very limited capacity available at our hospitals.”

Anthony McKeever, Executive Lead for Mid and South Essex Health and Care Partnership, said they are taking “every action possible” to “limit the impact on the NHS and the wider health system” including finding additional places to discharge people to, so the pressure on hospital beds can be eased.

The government’s latest figures showed that Southend, Basildon, and Broomfield University Hospitals, which come under the Mid and South Essex NHS Trust, had 549 CCP virus in patients, more than at any time during the pandemic.

The whole of Essex is in England’s “Tier Four: Stay at Home” category, the highest alert level of its CCP virus curbs, along with all of London, the East of England, and most of the southeast after the government tightened restrictions earlier this month.

That was following news that a new variant of the CCP virus had, according to Health Minister Matt Hancock, gone “out of control,” and Prime Minister Boris Johnson said that it could be 70 percent more transmissible than the old variant.

To stem its spread, the government reversed plans to ease curbs on family gatherings over the festive season and announced that London and large swathes of Southeast England would go under the tier four restrictions, which are broadly equivalent to the national lockdown in England in November.