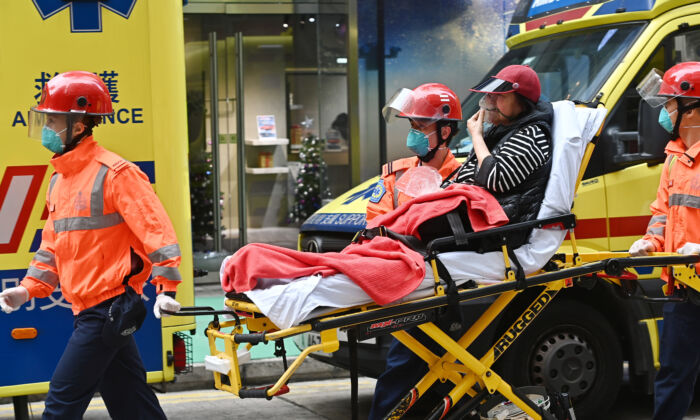 Rescue workers carry a victim to an ambulance after a fire broke out at the World Trade Center in Hong Kong, on Dec. 15, 2021. (Sung Pi-lung/The Epoch Times)
HK Current Affairs

Over 300 people were trapped on the rooftop of Hong Kong’s World Trade Center after a major fire broke out on Dec. 15.

At least 13 people were injured and taken to hospital.

Firefighters used two jets and mobilized two breathing apparatus teams to fight the blaze, according to a government notice.

The fire likely started from the machine room on the first floor, which later burnt scaffolding on the outside of the building, according to the preliminary investigation.

The 38-story building, which houses offices and a mall, is currently under renovation.

No fatalities have been reported and the fire was extinguished at 4:30 p.m. local time.

One of the 13 who has been sent to hospitals is in critical condition.

The fire was raised to a level-three alert at 1 p.m., with level five being the most severe.

Thousands of people have been evacuated from the building, according to the government notice.

Firefighters also rescued dozens of people who were trapped on the lower floor of the building.

The fire started in the early afternoon in the city’s popular commercial and shopping district of Causeway Bay. The authorities have cordoned off the area.

Hong Kong Epoch Times staff and The Associated Press contributed to this report.