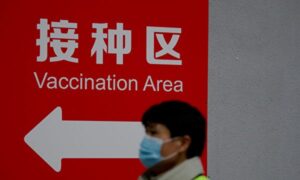 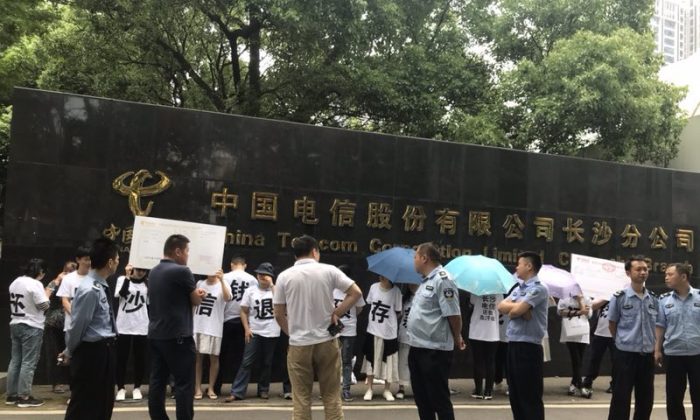 Holding up cardboard signs and dressed in white T-shirts, a dozen victims of a financial scam stand outside of the Changsha branch of China Telecom demanding to get their money back. (Ms. Li)
China Society

A major Chinese telecoms company is suspected of scamming customers in Changsha City, a metropolis located in central China’s Hunan Province. Meanwhile, local media and authorities have turned a blind eye to their misfortunes.

According to 212 victims, since 2012, a manager surnamed Hu working at the Changsha branch of China Telecom has been promoting an investment package whereby customers could put down deposits in advance into the company’s bank account, and in return, receive the latest model of the Apple iPhone along with their deposits back, in a few months time.

However, victims said their money has been pilfered.

“We had never thought that this was a scam. We thought it was 100 percent part of the telecom company’s operations,” said Ms. Li in a phone interview with The Epoch Times. Li said she put down 14 million yuan (about $2.2 million) in deposits, but she only received about 6 million yuan (about $941,690) back.

China Telecom, China’s largest state-run telecommunications firm, is a provider of wireline and mobile network services. According to the company’s website, it has about 250 million mobile subscribers, as of the end of 2017.

Over the years, because newer models of the iPhone were more expensive, the required amount of advanced deposits increased, according to Li. The manager told investors that they could get multiple iPhones if they placed a higher deposit.

Since the second half of last year, Li said she hadn’t received her advanced deposits back in time. She then visited the China Telecom office in Changsha, but she was told that the company never offered such an investment package, while Hu had gone missing.

Earlier this year, Li explained that she had successfully filed a lawsuit against the Changsha branch of China Telecom at a local court. However, the case was dismissed on April 25, even though Hu was arrested a day earlier.

On the afternoon of May 3, Li said she and several other victims held up banners and staged a protest outside the company office, but company security guards forcibly took their banners away. Li recalled seeing about several police officers nearby, but they did not intervene.

According to Li, the company has failed to return a total of nearly 50 million yuan (about $7.8 million) in deposits to its 212 so-called investors.

Local media talked to some of the victims, according to Li, but the scam never surfaced on the news.

It is unclear whether Hu pocketed the deposits, or if executives at the Changsha branch played a role behind the scam.

However, the case is one of many examples of big firms and major financial institutes in China that increasingly offer risky investment options.

In June 2016, state-run newspaper Beijing Morning Post reported a scam at an unnamed bank. A woman surnamed Zhang could not get her money back after investing 3 million yuan (about $470,970) on a one-year mutual fund. The fund, as it turned out, was not on the bank’s portfolio. A manager surnamed Wang, who had sold Zhang the mutual fund, had worked secretly for an investment company in Shenyang City in northeastern China.

The investment company later came under police investigation for illegally collecting funds. Several of its executives were on the run.

After several bank employees, including Wang, were fired, Zhang filed a lawsuit in Tianjin City against the bank to seek legal redress. The court dismissed the lawsuit, with the rationale that the bank was not responsible for Zhang’s losses.