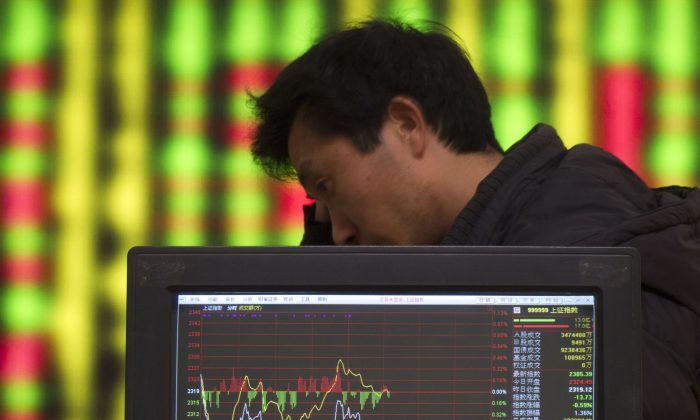 An investor watches the electronic board at a stock exchange hall in Shaoyang City, Hunan Province in China on January 30, 2012. (VCG via Getty Images)
China Business & Economy

A Chinese company currently being investigated for misconduct in the stock market by manipulating future contracts.

Futures contracts, also known simply as futures, are agreements made between two parties to buy and sell assets at a future date for an agreed-upon price, usually as a way of minimizing risk. Futures are traded on an exchange for many commodity products, from eggs to gasoline to precious metals.

A Chinese corporation, Grand Resources Group (GRG) based in Ningbo City, Zhejiang Province, was recently placed under investigation by an unnamed Chinese Communist Party agency, according to a report by Chinese newspaper Beijing News published on Oct. 30.

According to the company’s website, the group specializes in distributing raw materials, including petrochemical, energy, metal, and agricultural products. It has more than 30 subsidiaries in China with a total sales volume of over 75.7 billion yuan (roughly US$11.3 billion).

Citing a source familiar with the matter who has obtained an official document regarding the investigation, Beijing News reported that former chairman of GRG’s subsidiary Grand Industry Holding Wu Xiangdong, chairman of the board of GRG’s petrochemical subsidiary Wang Kaihong, and an unnamed female employee who manages futures contracts for the corporation, were being investigated for allegedly “manipulating the futures contract market.”

Earlier this year, Wu had stepped down from his chairman position, citing personal health problems. But on the Internet, rumors circulated that the company had been fined for violations, for a total of 560 million yuan (roughly US$84.2 million).

On Sept. 25, the company sent out a public notice announcing that it was cooperating with authorities on an ongoing investigation. It also said the company’s petrochemical subsidiary has froze and set aside 560 million yuan to pay to a CCP agency—presumably to pay a fine.

According to Beijing News, in August 2016, an investor named Li Zhi reported the company to the China Securities Regulatory Commission. But Li told the publication he is not sure if the current investigation has to do with his reporting.

Li had sent out an open letter regarding futures in the glass industry that he and others had invested in. They suffered a great financial loss as a result of GRG’s price manipulation, Li claimed. He pointed to dramatically rising glass prices in August 2016 as evidence that the company had cornered the market by engaging in high-frequency trading tactics, such as selling a high number of stocks to itself, and “layering,” which involves issuing and then canceling orders it actually did not intend to carry out. This method fools traders and investors into thinking there is significant buying pressure.