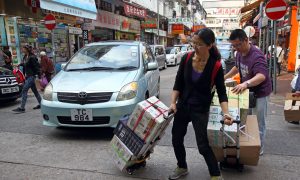 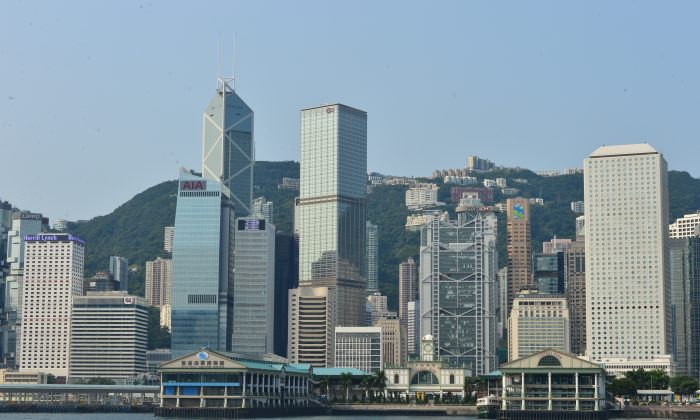 The relationship between Hong Kong and mainland China is very complicated. It is also quite a fascinating topic.

Hong Kong’s contribution is community-led. We all know that Hong Kong’s businessmen began to move into China at the beginning of China’s economic reform, mainly the manufacturing businesses.

In the late eighties and nineties, almost all of Hong Kong’s manufacturing factories had moved to mainland China, bringing with them the industrial management system and export-initiated processing industry model.

By the late 1990s, Hong Kong had almost no manufacturing industry. It had all settled in mainland China.

This put both ends of the production process—the supply of raw materials and the marketing of products—on the world market, and it meant large quantities of imports and exports.

Deng Xiaoping said in internal speeches that if mainland China could “devise dozens of cities like Hong Kong, things would be easier.”

In the next few decades, China’s economy followed the Hong Kong model, from the neighboring Guangdong Province to the rest of China. Now China’s import and export trade is 40 percent of the national GDP, similar to the trade model of Hong Kong.

The land policy of Hong Kong has also been considered a reference by mainland China. Large numbers of Chinese delegations visited Hong Kong in the mid-1990s, and they admired Hong Kong’s land policy.

I once interviewed a member of a central-government delegation, and his envy of the Hong Kong Land Fund was palpable. At that time, the Chinese government, especially the local governments, were financially tight. Therefore China began to model the land policy of Hong Kong.

Many cities started to follow the practice of Hong Kong in which the government develops land for sale and then forms business partnerships with real estate developers to raise real estate prices. In many cities, more than 50 percent of local revenue is from land transaction fees.

Back in 1997, there was a great controversy between Britain and China over the future development of Hong Kong. There were two main arguments.

The second argument was on the democratic elections of the Hong Kong Legislative Council (LegCo) promoted by Chris Patten.

There are two types of members in the LegCo. One type is chosen through direct election. Similarly to Western countries, they are elected by voters in the geographical constituency.

Currently there are 35 directly elected LegCo seats, accounting for half the total seats.

The other members are elected through functional constituencies, in which a professional or special interest group is involved in the electoral process. For example, the financial sector and the financial services sector elect two members.

The problem is that the election of the financial sector and financial services sector is dominated by investment banks, security firms, and commercial banks. Therefore the members of the sector are actually elected from a very small number of people.

The Chinese government thought the second election approach was to their advantage, since it would be much easier to control a few hundred business organizations than millions of voters. Therefore they wanted to continue this practice.

Chris Patten was the only governor appointed by the British government who had a political background. All former governors were career diplomats from the UK Foreign Office.

The Chinese government completely negated this reform. Upon the handover of Hong Kong to China in 1997, the elections from functional constituencies were restored to the original small group voting system. The current council elections remain the same as those before Patten’s 1995 electoral reform.

Another issue is the election of the Hong Kong chief executive.

In 1997, the Chinese Communist Party (CCP) appointed a 400-member election committee to be responsible for electing the chief executive. Later, the committee members increased to 800 people, then to 1,200.

The CCP manages the appointment of the committee members, including the so-called 36 sectors, all the council of Hong Kong including the District Council, the Chinese People’s Political Consultative Conference (an advisory body for the Chinese Communist Party) representatives, and people from religion, education, culture, arts, business, banking, and union groups.

This arrangement helped the Chinese regime control most of the election committee and the election of the chief executive.

Last year, the cause of Hong Kong’s Umbrella Movement was that Beijing authorities had promised to have universal suffrage in Hong Kong in 2017. However, in operational details, the National People’s Congress Standing Committee (NPCSC) released a decision that the chief executive candidates had to be accredited first by the Election Commission.

Hong Kong people believe that Beijing’s so-called universal suffrage means that we have bad guy A and bad guy B, and you can choose either of them. This is not truly a democratic election, so the protests took place.

Beijing does not want Hong Kong to have true democratic elections. There are two possible reasons for this.

The first is that Beijing does not want to have a hard-to-control chief executive. The second is that Beijing authorities fear that democratic elections in Hong Kong might set up an example for mainland China.

For the past 30 years, Hong Kong has had an enormous impact on the mainland, particularly the influence on lifestyle and ideology. Beijing has managed to hitch the Hong Kong business elite tightly through a variety of measures. They would not allow anything to complicate the issue or have a new political and social model to stimulate liberal and democratic movement inside mainland China.

In academia, there is a saying that Hong Kong is a primitive specimen of capitalism. Hong Kong has a very simple tax system, a very low-threshold social security, and a very liberal business environment.

The government has almost no control over the economy. Many people say Hong Kong has freedom but no democracy.

I personally believe that a society needs yin-yang balance to make progress. Using the terms of modern sociology, social development needs the balance of two factors: one is the overall growth of economic efficiency, and the other is social fairness and justice.

However, these two factors are in conflict with each other, because social justice requires government intervention to redistribute income through taxation and a social security system, which means an increase in taxation. Improving social efficiency requires encouraging investment, reducing taxes, and reducing welfare redistribution.

I myself have a “two feet principle.” A society must move both feet at the same time in order to ensure the progress of the whole society.

This is a little bit like the U.S. Republicans and Democrats, or the British Conservative Party and Labor Party. Both former parties request tax cuts, encourage investment, reduce social welfare, and look after the powerful groups; the latter parties put more emphasis on social justice, increase of taxation, and social welfare.

The U.S. Republicans and the British Conservatives are more like a father, encouraging his sons to venture into the world and win success with their own strength. Meanwhile, the Democratic Party and the Labor Party are more like a mother, looking after the weak ones among her children, wanting to give money to aid them privately.

Traditional Chinese society did not have the two-foot adjustment mechanism, so it had to complete the adjustment though a socially destructive process. This is the reason behind the Chinese dynasty changes.

At the beginning of a new dynasty, the society was relatively fair after the war. The new government would encourage farming to increase the production capacity.

After 70 to 80 years of peace, the society would begin to differentiate. Major land takeovers emerged, the rich formed partnerships with the powerful, wealth inequality got worse, and social conflicts intensified.

About a hundred years later, social unrest began. Then they moved to the next war and finally regained a peaceful state through a revolution or war.

Hong Kong is more like an ancient Chinese traditional society.
Hong Kong is the freest place in the world to do business. It has a very low tax rate, so the government does not have the financial capability to adjust the wealth disparity.

In 1997, the starting salary for a Hong Kong university graduate was about HK $15,000 (US $1,935). It maintains a similar level in 2014. Hong Kong’s wage level has remained almost the same for the past 17 years, but prices have doubled during the same period.