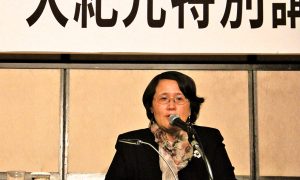 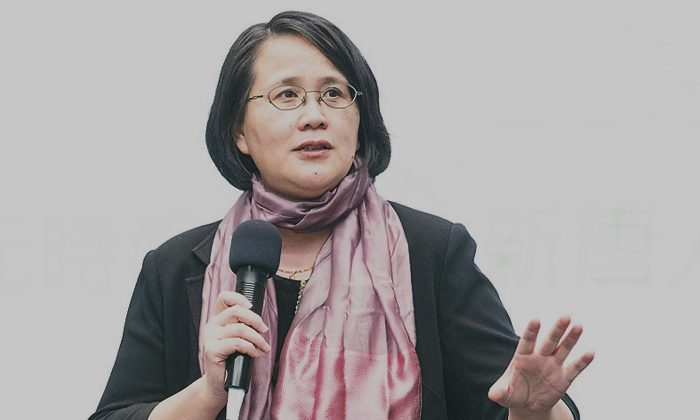 Guo Jun, branch manager of HK Epoch Times gives a speech at a conference in Taiwan in November 2014, she says as an independent media with integrity and truthfulness in reporting Epoch Times is the only window into the real China. (Chen Bo-Chou/Epoch Times)
HK Current Affairs

China’s real estate prices have increased dramatically in the past ten years. Beijing has been ranked the most expensive city in China, followed by Guangzhou and Shenzhen, which are both in Guangdong Province.

This is a very interesting phenomenon. Guangdong was the first province to implement China’s reform and opening policies, about ten years earlier than other provinces. Guangdong Province has the highest number of foreign companies, the highest volume of exports, and the largest number of private entrepreneurs.

Shanghai is the commercial and financial center of China. It sits on the south edge of the mouth of Yangtze River, and this special location provides a huge potential for the city. However, it is Beijing that has the highest property prices.

In fact, Beijing has the highest number of billionaires in China. In the 2013 Forbes list of the 400 richest people in China, 58 were from Beijing, 37 from Shanghai, and 34 from Shenzhen.

These two sets of data illustrate the prevalent features of China’s economy.

Economic activity and other activities all revolve around power. Therefore, Beijing has the highest number of rich people and senior officials and the highest property prices.

China’s economy is known as a socialist market economy. However, the government still dominates the market and has absolute control.

Even after China got access to the WTO commitments project, China continued to implement strict non-tariff control over economic activities. Taking the banking system as an example, China implements a branch-level approval system, which means any new branch opened by a foreign bank has to go through the approval procedures.

Local governments simply follow the steps of the central government. The policy of exclusion will apply to foreign companies and companies from other parts of China.

This absolute power of the government in the economic activity has led to the corruption that is prevailing at all levels of government officials.

Chinese people have a saying: If you have all levels of government officials line up and punish every second one of them, no one will be wronged, but you can expect that there will be some guilty ones left in the line.

Over the past twenty years, the most important driving force of China’s economy is exports.

The country’s total volume of exports and imports was US $3.87 trillion in 2012, and China’s GDP for that year was US $8.22 trillion. Foreign trade was about 47 percent of the total GDP. No other country in the world has such a high proportion of foreign trade, especially for a huge country like China.

The imported goods of China are basically used for manufacturing goods to export. The majority of China’s exported goods are of a low-level processing nature, and most of the raw materials and components are imported. Thus we can see that the more exports, the more imports.

China’s recently released official data shows that China’s imports and exports trade grew by 2.3 percent in 2014, the lowest growth rate since 1978. This trend is likely to have a decisive impact on China’s economy.

China’s economy has always been dominated by state investments, and these have a decisive impact on the economy.

In 2009, the Chinese government launched a four-trillion-yuan (US $645 billion) package to stimulate economic growth. Then in 2012, it launched another four trillion yuan.

It is predicted that this year the Chinese government will continue to increase public investment to stimulate the growth of the economy.

As one of the state’s crisis-management programs, a substantial increase in public investment can produce short-term benefits, but it will cause several difficult problems.

The second problem is that it squeezes the funds out of the private sector. The Chinese government’s investment (including the issuance of currency) basically goes to state projects and state-owned enterprises, which makes it harder for the private sector to get funding.

The private companies in southern China usually have to turn to underground banks for loans, and the interest rate can be as high as 60 percent.

The third problem is that it can lead to inflationary pressures. The inefficient use of funds in the public sector often increases the pressure on inflation.

In most countries around the world, domestic consumption contributes about 70 percent of the overall economy. China has long been around the ratio of 50 percent. In recent years, it even dropped to 40 percent or less.

This low rate is related to China’s economic structure.

One factor is high income inequality. The fruits of economic growth are predominantly collected by the most affluent classes.

If they earned a few million dollars more, they would only increase their investment and spending on luxury goods. Consumption increments have to be achieved through increasing household income, but the huge income inequality inhibits this process.

Another factor is the lack of social security. Chinese people must bear the high cost of their children’s education, their future retirement costs, medical care, and the burden of high housing prices.

These all contribute to the reduction of consumption and partially explain the reason for Chinese people’s savings habits.

For the past twenty years, China’s high economic growth has not brought many changes to the industrial structure. China’s technological level is basically the same as that of the 1980s, mainly due to lack of innovation.

Most Chinese products, even the so-called new industrial products, are imitation technology. The core technologies are bought, and even the key components are purchased.

The best example is the automobile. Currently China can produce 10 million vehicles a year, but they cannot manufacture their own engines.

Almost all popular TV shows in China are imitations from the United States or Japan. Very few originate from self-creation or innovation.

One reason behind the lack of innovation in China is the state’s inability to protect the interests of innovators. Any inventions or creations could be copied in China within a few months or even weeks after being made public. China’s judicial system cannot provide protection to the innovators.

There is another profound reason behind it. The Chinese government imposes strict control over information, freedom of speech, and artistic creation.

It bans so-called opposite ideas and voices, which seriously impedes the spirit of innovation. A society that cannot tolerate any different views is a society that does not allow for creativity and innovation.

The issue of China’s economic bubble has been discussed internationally and domestically for many years.

The main sign is inflated real estate prices. China is a country with unbalanced regional development, and the average income difference between Shanghai and Guizhou Province is nearly ten times.

In Beijing, the annual income of an ordinary employee is 50,000 yuan (US$8,059). This can only buy one square meter of a property 80 km away from the center of Beijing, or half a square meter within the second ring of downtown Beijing.

Such high housing prices are closely related to the income inequality and the lack of safe investment instruments in China. Most rich people will choose real estate as an investment, and in the past two years there have been news reports that some officials have over one hundred houses.

Chinese real estate prices have increased more than ten times since 2000. Real estate has drawn a large sum of money from the industrial and commercial sectors. If the real estate bubble bursts, the impact on China’s economy is self-evident.

The local governments are the major promoters that are pushing up real estate prices. Massive housing and infrastructure construction, as well as high prices, would benefit the local governments through collection of taxes, sale of land, and change of land zoning.

It is very common in China that local governments, banks, and real estate developers formed a so-called iron triangle. They buy land at low prices or even snatch land and property from ordinary people, and then they build and sell at much higher prices.

The central government will not adopt certain policies to drive down real estate prices, and sometimes they have to adopt a loose monetary policy to maintain the operation of the market.

This accumulated effect has led to higher financial risks. The consequence would be high inflation or bank failures.

Because Chinese banks are state-owned, high inflation is inevitable. Since last year, the exchange rate between yuan and U.S. dollars has changed from an upward trend to a downward trend.

The next two to three years will be the highest yuan exchange rate risk period. Entities with large yuan assets should take precautionary measures.