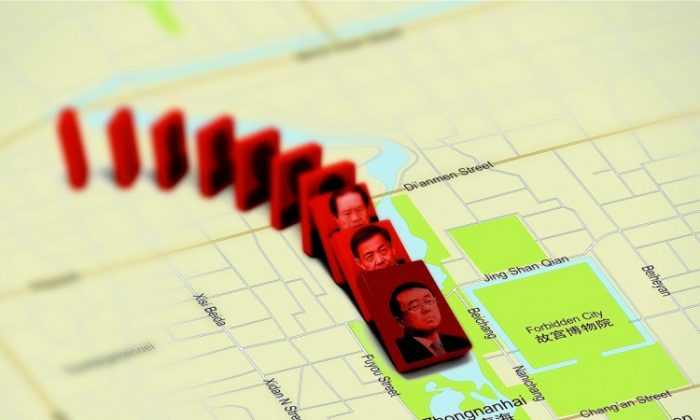 The attempted defection by former Chongqing police chief Wang Lijun (first domino) set in motion a chain of events exposing and inflaming the Communist Party’s internal strife, which has come to a head presently. The once powerful Bo Xilai (second domino) is facing criminal charges, and the man Bo was to succeed as the powerful domestic security czar, Zhou Yongkang (third domino), has been stripped of real power. (Bo and Wang—Feng Li/Getty Images; Zhou—Liu Jin/AFP/Getty Images; graphics by Vadim Berestetsky/Epoch Times)
Opinion

China’s economic rise facilitates its power and scope expansion, which then leads to the conflicts between China’s national interests and the current international order. Conflict, compromise, and cooperation would be the main theme among the “Three Territories” of Japan, China, and the United States.

The direction of the development will determine the path of the future Pacific Century. Our main focus now is on the internal problems of China.

By 2012, Hu Jintao had held the offices of CCP General Secretary and President of China for almost 10 years. In the fourth quarter of that year, the CCP held the 18th National Congress, which included a power transfer at the highest level within the CCP.

On the same day, hundreds of armed Chongqing police surrounded the Chengdu U.S. Consulate and confronted its security staff. Soon, however, the Sichuan Provincial Public Security Department sent a special police team to the scene, and they confronted the Chongqing police.

Wang was very active for a decade prior to 2012, and he committed a lot of human rights violations. Therefore the United States refused his request.

Eventually, the Chinese government sent Qiu Jin, a deputy minister from the Ministry of National Security, to the U.S. Consulate to bring Wang directly to Beijing.

This incident became a fuse that led to China’s top-level political turmoil, and it has had a direct influence on the high-level power reshuffle since 2012.

The first public figure who was directly affected by the incident was Bo Xilai.

At that time, Bo served as a member of the central Politburo and secretary of Chongqing city. He came to prominence through his tenures as the mayor of Dalian in early 1990s, becoming a very popular figure in China’s political arena.

Bo’s father, Bo Yibo, was one of the early economic decision-makers under the CCP regime. He held different posts, including Vice-Premier. When Deng Xiaoping came back to power in 1979, he pushed the “reform and opening” policy with the support of a select group of powerful CCP veterans, including Bo Yibo.

The “striking black” campaign used tough measures, and even rode roughshod over judicial due process, to strike at private entrepreneurs of the past ten years, naming them as mafia who used illegal means to get rich.

The campaigns are actually a neo-leftist movement. Because of the huge wealth disparity for the past 20 years, ordinary Chinese have had very limited benefits from economic growth, and there is a hostile mood towards the rich and officials in the society.

Bo Xilai’s Chongqing model was welcomed by many members of the low social class. Of course, he also won strong support from the leftists within the CCP regime.

Wang Lijun is an important political aide to Bo. To be accurate, he is one of Bo’s most important “political thugs.” Wang was responsible for suppressing any opposition to Bo’s policy, including government officials and intellectuals.

Wang was taken to Beijing after he fled to the U.S. Consulate. He handed over some inside information to the United States and CCP senior officials, and the incident led Beijing to discharge Bo’s duties and resulted in a full investigation.

The official version is this: Bo’s wife, a very active finance lawyer in China, personally murdered her British financial advisor, Neil Heywood. Wang investigated the murder, found out the truth, and reported it to Bo.

Bo asked him to cover up the case, but Wang did not obey. Bo intended to kill Wang, so Wang fled to the U.S. Consulate.

However, according to the information we hold, Beijing found out about Bo’s eavesdropping operations over the Beijing CCP leadership’s phones. They had doubts about Bo’s intentions, so they performed an intense scrutiny.

Three people presided over the investigation. One was Hu Jintao’s friend and then-director of the CCP General Office Ling Jihua, the second was the secretary of the Central Commission for Discipline Inspection He Guoqiang, and the third was Hu Jintao’s political successor Li Yuanchao.

Eventually the Central Commission for Discipline Inspection had a talk with Wang and exerted a lot of pressure on him, which was the true reason for the falling-out of Wang and Bo.

In March 2012, Bo was officially discharged from his duties to accept the full scope of the investigation. Finally Wang, Bo, and Bo’s wife Gu Kailai were all convicted. Wang was convicted for defection, Bo for corruption and abuse of power, and Gu for murder.

Here we need to talk about what type of pressure was used on Wang.

In 2006, Epoch Times reported allegations of live organ harvesting that was being done to Falun Gong practitioners, and the allegations have caused worldwide concern. More and more evidence indicates that the Chinese judiciary system and military hospitals have cooperated to make prisoners, mostly prisoners of conscience, the target for organ harvesting.

After investigation, Canada’s former Minister of Justice called this operation “killing on demand.” Many countries, UN agencies, and human rights organizations have begun to investigate the allegations, and the CCP regime faces unprecedented pressure.

In China, the first large-scale organ harvesting began in Dalian City, where Bo served as mayor, and Liaoning Province, where Bo later served as governor.

Wang himself was the direct operator of organ harvesting. When he was the head of the Public Security Bureau in Jinzhou, a city in Liaoning, he oversaw several thousand intensive on-site cases of organ transplantation.

He personally said this when he received a medical innovation award for pioneering a lethal injection method for organ harvesting.

This is a crime against humanity. The CCP regime had to prepare a scapegoat at a certain point when it could not continue to hide the truth, so it could discharge its political, moral, and legal responsibility for live organ harvesting. Therefore Wang and his boss Bo faced enormous pressure.

The investigation of Bo was conducted directly by the Central Commission for Discipline Inspection, but it hauled out a large number of related persons. The most important one was Zhou Yongkang, a former Politburo Standing Committee member and secretary of the Central Political and Legal Affairs Commission.

Zhou was the second person who was affected by the “Wang Lijun incident.” During Hu Jintao’s ten-year tenure in power, Zhou was in charge of China’s judiciary, prosecution, courts, public security bureau, and 1.5 million armed police. He is one of the most powerful figures in China’s peacetime.