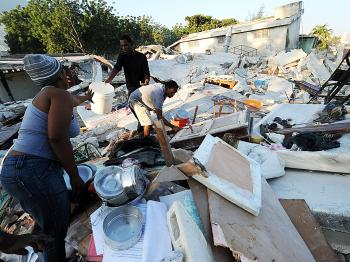 Haitian earthquake survivors search for useable items under the rubble of a collapsed chapel in Port-au-Prince. (Jewel Samad/AFP/Getty Images)
International

The quake, as powerful as the strongest aftershock of the 7.0 shock of January 20, struck at 6:00 a.m. local time. Most of the population were sleeping outside, which is why there were no new casualties.

The epicenter of the quake was 35 west-southwest of Port-au-Prince.

A 4.7 magnitude aftershock struck the region on Sunday.