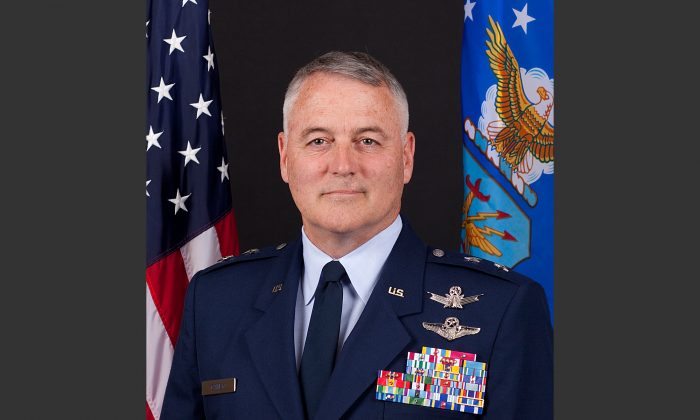 This undated handout photo provided by the U.S. Air Force shows Maj. Gen. Michael J. Carey. The Air Force is firing Carey, the two-star general in charge of all of its nuclear missiles, in response to an investigation into alleged personal misbehavior, officials told The Associated Press on Friday, Oct. 11, 2013. Carey is being removed from command of the 20th Air Force, which is responsible for three wings of intercontinental ballistic missiles  a total of 450 missiles at three bases across the country, the officials said. (AP Photo/U.S. Air Force)
US

Maj. Gen. Michael Carey, who was in charge of the Air Force’s nuclear missile arsenal, was fired on Friday. Carey was accused of personal misconduct.

WASHINGTON (AP) — The Air Force fired the general in charge of its nuclear missiles on Friday, just two days after a Navy admiral with top nuclear weapons responsibilities was sacked. Both men are caught up in investigations of alleged personal misconduct, adding to a cascade of turmoil inside the nation’s nuclear weapons force.

The Air Force removed Maj. Gen. Michael Carey, a 35-year veteran, from his command of 20th Air Force, responsible for all 450 of the service’s intercontinental ballistic missiles. Carey, who took his post in Wyoming in June 2012, will be reassigned pending the outcome of an investigation into personal misbehavior, the service said.

The Air Force would not specify what Carey is alleged to have done wrong, but two officials with knowledge of the investigation indicated that it was linked to alcohol use.

They said it was not related to the performance or combat readiness of ICBM units or to his stewardship of the force.

Removing senior officers in the nuclear force is rare but has happened twice this week.

On Wednesday the Navy said Vice Adm. Tim Giardina, the second-in-charge at U.S. Strategic Command, was fired amid an investigation of gambling issues. He was demoted from three- to two-star rank and reassigned to a Navy staff job until the investigation is completed.

Together, the Carey and Giardina firings add a new dimension to a set of serious problems facing the military’s nuclear force. The ICBM segment in particular has had several recent setbacks, including a failed safety and security inspection at a base in Montana in August, followed by the firing of the colonel there in charge of security forces. In May, The Associated Press revealed that 17 Minuteman 3 missile launch control officers at Minot Air Force Base, N.D., had been taken off duty in a reflection of what one officer there called “rot” inside the ICBM force.

Air Force Gen. Robert Kehler, the nation’s most senior nuclear commander as head of U.S. Strategic Command, called the Carey and Giardina matters “unfortunate behavioral incidents,” but he would not discuss details.

In a telephone interview from his headquarters near Omaha, Neb., Kehler said he told Secretary of Defense Chuck Hagel and the chairman of the Joint Chiefs of Staff, Army Gen. Martin Dempsey, on Thursday that the two cases had not shaken his confidence in the force.

“I still have 100 percent confidence that the nation’s nuclear deterrent force is safe, secure and effective.” He added that “this is something that has been on their minds as well,” referring to Hagel and Dempsey.

“You are going to have to make your own judgment when all the facts come out on these two particular cases, but I can say this: In these cases, this ultimately had to do with a loss of confidence” in Carey and Giardina “as a result of certain behavior.”

Other problems have surfaced this year. In a March inspection, launch crews at Minot scored the equivalent of a “D” grade on missile operations. In June the Minot officer in charge of training and proficiency of missile crews was fired.

Throughout this period the Air Force and top Pentagon officials have insisted that the nuclear force is safe and secure. But the competence of its management has been questioned.

Documents obtained by the AP show that at lower levels the force is beset with morale problems and incidents of indiscipline.

The U.S. has been shrinking the size of its nuclear arsenal for many years; it is comprised of long-range missiles aboard submarines, long-range bombers and ICBMs. As of Oct. 1 the U.S. had 1,688 deployed strategic nuclear warheads, which Washington is obliged to reduce to 1,550 by 2018 under the New START treaty with Russia.

As the arsenal has grown smaller, questions about management of the force have loomed larger. Rep. Howard “Buck” McKeon, the Republican chairman of the House Armed Services Committee, said in August that the Air Force must refocus on its nuclear mission. He urged it to “hold failed leadership” accountable and to “recommit itself from the top down” to the mission of safely operating nuclear weapons.

The decision to sack Carey was made by Lt. Gen. James Kowalski, commander of Air Force Global Strike Command, which is in charge of all Air Force nuclear weapons, including bombers. The case appears to be unrelated to that of Giardina, but the two men are associated in the chain of responsibility for U.S. nuclear weapons.

Carey did not report directly to Giardina, but the ICBMs under Carey’s command would, in the event of war, receive their launch commands through Strategic Command, where Giardina had been the deputy commander since December 2011. By coincidence, Kowalski, who fired Carey, has been nominated to succeed Giardina at Strategic Command. The Senate has not yet confirmed Kowalski.

“It’s unfortunate that I’ve had to relieve an officer who’s had an otherwise distinctive career spanning 35 years of commendable service,” Kowalski said in a written statement from his headquarters at Barksdale Air Force Base, La.

An internal email obtained by the AP on Friday said the allegations against Carey stem from an inspector general probe of his behavior while on an unspecified “temporary duty assignment.” The email said the allegations are not related to the operational readiness of the ICBM force or recent failed inspections of ICBM units.

At a Pentagon news conference, an Air Force spokesman, Brig. Gen. Les Kodlick, would not provide details about the alleged misbehavior by Carey except to say it does not involve sexual misconduct or criminal activity. He said the investigation had been underway for several months.

“There was misbehavior such that (Kowalski) decided that it didn’t exemplify the trust and responsibilities required of a commander who is responsible for the nuclear force,” Kodlick said.

“Especially in the nuclear enterprise, it’s a position of great trust and responsibility. The nuclear deterrence mission is one of great focus, discipline. Personal behavior is vital to that, especially from a commander.”

Separately, two senior defense officials with knowledge of the allegations told the AP that they are at least partly related to alcohol use. The officials spoke only on condition of anonymity because they were was not authorized to discuss an internal investigation that is not yet finished.

Carey began his Air Force career in the enlisted ranks in 1978. He was commissioned as an officer in 1983 and is a veteran of the wars in Iraq and Afghanistan. He took command of the ICBM force, at 20th Air Force headquarters at F.E. Warren Air Force Base, Wyo., in June 2012.