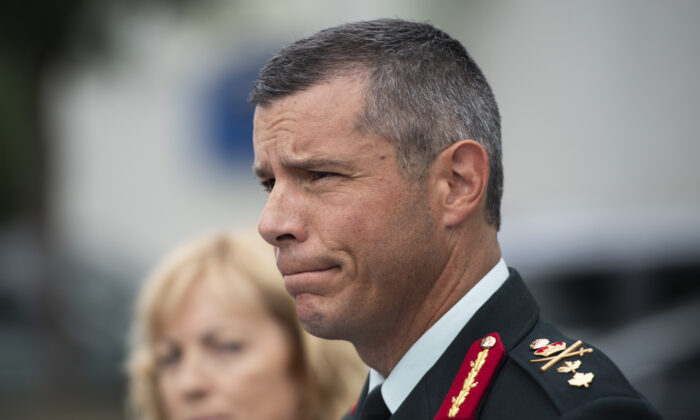 Maj.-Gen. Dany Fortin speaks to reporters outside the Gatineau Police Station after being processed, in Gatineau, Que., on Aug. 18, 2021. (The Canadian Press/Justin Tang)
Canada

Maj.-Gen. Dany Fortin said Tuesday that he is not guilty of sexual assault and never had any physical contact with a woman who made detailed allegations against him in court this week.

Speaking in French on the second day of his trial, Fortin told a Gatineau, Que., courtroom that he was shocked and devastated to learn of the allegations.

The complainant in a sexual assault trial said earlier on Sept. 20 that Fortin was “without a doubt” the person who attacked her in her dorm room one night in 1988.

Fortin was the military officer in charge of the federal government’s COVID-19 vaccine campaign. He was removed from the position in May 2021 and charged with one count of sexual assault three months later.

His defence lawyer, Isabel Schurman, has argued that the complainant incorrectly identified Fortin.

She told the court she opened her eye and recognized Fortin, then pushed him away and told him to get off her before he backed away.

Fortin, in military uniform, tented his fingers on the desk in front of him while he testified Tuesday, standing in the same spot where the complainant gave her testimony as he watched.

His lawyer asked detailed questions about the layout of the military college and the barracks.

Fortin’s testimony shored up the complainant’s account that her door had to remain unlocked. He said doors were not locked for fire safety reasons, and outside doors were unlocked with no one guarding them and verifying who came and went.

He asserted that he never entered the room of the complainant or made any kind of sexual overtures toward her.

He has not yet been cross-examined by the prosecution.

In her cross-examination of the complainant on Monday, Schurman pointed out differences between her testimony in court versus accounts she gave to an investigator last year on details such as the timing of the incident, whether she heard and recognized Fortin’s voice and whether her roommate was present.

During the emotional conclusion of her testimony Tuesday morning, the complainant pushed back on the suggestion that her fuzziness on some of the circumstances could cast doubt on her memory of key details.

She said, testifying in English, that she still has “nightmares” and a “recurring vision” of the assault—and though she can’t be 100 percent sure of some of the specifics 34 years later, she is ironclad on her attacker’s identity.

Immediately after the encounter, she said, she visited her then-boyfriend and told him about what happened. She also testified that their relationship later soured and that they were “definitely not” on good terms.

Her ex-boyfriend was called as a witness by the defence on Tuesday. He acknowledged their relationship on the stand but told the court in French that he had no memory of the conversation, or of any interaction between the complainant and Fortin.

During cross-examination, prosecutor Diane Legault asked whether he knew of any assaults on campus at the time. He said he didn’t remember having knowledge of sexual assaults of a criminal nature, but said he witnessed discussions and an environment that could be described with the term “sexual misconduct.”

The complainant also testified on Monday that she believed her roommate was in the room during the assault and could have been a witness—and that she later asked her roommate, without offering specifics, whether she had seen or heard something.

Legault also called the complainant’s former roommate to the stand.

Testifying in English, she corroborated the complainant’s account that they stayed together in a double room in the barracks at the time and that she, too, knew Fortin.

She said she had memories of having fun with Fortin, that he was a classmate and “camaraderie was expected.”

Her overall experience in the military college was not positive, she said. “You were exposed to a lot of behaviours that probably were not appropriate.”

She noted that they were teenagers, many of them under the legal drinking age and being pushed to their limits.

She said she had no memory of being asked about an incident by her then-roommate. “I’m not saying it didn’t happen, because personally, from my own trauma, I blocked a lot of those memories out,” she said.

A senior member of the complainant’s chain of command was also called to the stand on Tuesday and confirmed that the complainant reported the assault to him in early 2021.

In addition to defending himself in his criminal case, which is being heard by Judge Richard Meredith, Fortin is also challenging his removal from the vaccine campaign in Federal Court.

He testified Tuesday that he did not know what he was being investigated for when he was taken out of the position, but that he knew the Privy Council Office and Prime Minister’s Office were involved in the decision. He said he found out about the nature of the investigation via media reports.

Fortin added that his life is upside down, his career is stymied, his financial situation is precarious and his family is suffering because of what he called a “false accusation.”

The trial is expected to continue Oct. 24.