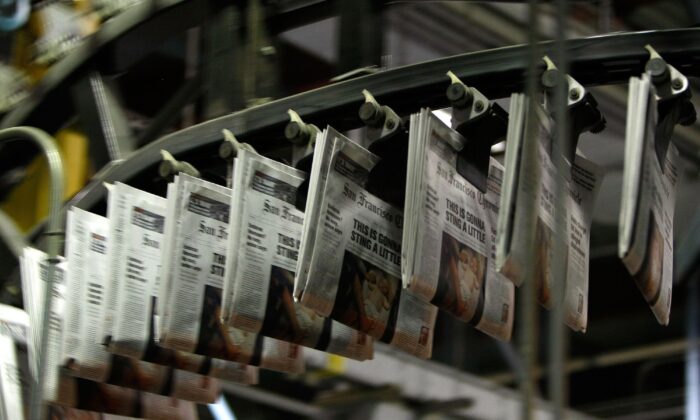 Freshly printed copies of the San Francisco Chronicle roll off the printing press at one of the Chronicle's printing facilities in San Francisco on Sept. 20, 2007. (Justin Sullivan/Getty Images)
Viewpoints

Maintaining One’s Joy Despite All the Bad News

In addition to whatever problems we’re grappling with as individuals, news reports constantly remind us that there are serious problems in the larger world beyond our daily routines. It’s proverbial in the news business that “no news is good news.” This refers to the tendency in human psychology to pay more attention to reports of dangerous, harmful, scary problems than to cheery reports that everything is OK.

In this era of 24-hour news (thank you, Ted Turner—or maybe not) it’s easy to overdose on bad news. Some people respond by tuning out the news entirely, or at least severely limiting their intake of news.

Journalist Amanda Ripley wrote an opinion piece for The Washington Post in July that speaks for a huge number of Americans. Its title frames the issue well: “I Stopped Reading the News. Is the Problem Me—or the Product?” Reading (or watching) the news left her feeling “drained,” “depressed,” “paralyz[ed].” She even went to a therapist. Then she discovered that other journalists were shunning or cutting way back on news consumption, too.

Indeed, a Reuters study found that 42 percent of Americans “sometimes or often actively avoid the news.”

Ripley quotes journalist Krista Tippett, who, I believe, nails the problem, saying: “I don’t actually think we are equipped, physiologically or mentally, to be delivered catastrophic and confusing news and pictures, 24/7.”

That sounds to me like a form of shell shock or PTSD—not in terms of severity, but in terms of human beings not being equipped to endure a repeated bombardment by jarring stimuli.

Ripley’s article (well worth reading in its entirety) cites three specific ways that news reporting can harm people psychologically. The one that stood out to me was the human need for hope versus the media serving up gobs of hopelessness.

“Researchers have found that hope is associated with lower levels of depression, chronic pain, sleeplessness and cancer, among many other things,” she writes. “Hopelessness, by contrast, is linked to anxiety, depression, post-traumatic stress disorder and … death.”

We should be ever-mindful of Thomas Jefferson’s timeless wisdom that preserving a free democratic society is possible only when there is an “informed electorate.” The challenges facing our country won’t go away by being ignored.

We can, however, find a healthy balance. We can and should be informed enough to vote intelligently and to recognize which political candidates may deserve our support. But at the same time, let’s not lose our joy or our zest for living.

It isn’t normal for life to be all politics, all the time. We Americans need to not only remember our blessings, but to actively enjoy them. What a great privilege it is to be an American. We forget too often that for most of human history, life was, in the memorable phraseology of philosopher Thomas Hobbes, “nasty, brutish, and short,” and plagued by poverty, disease, and oppression.

Our free society gave rise to explosive improvements in standards of living. Our unprecedented affluence expanded leisure time for millions of people, producing a wide array of comforts, attractions, activities, and enjoyable recreations, and opportunities to undertake fulfilling challenges.

Are there serious problems in the world? Of course. There always are, always have been, and always will be. Here are a few of today’s issues that we need to remain alert to:

Globally, unenlightened throwbacks such as [Vladimir] Putin and Xi [Jinping] just don’t grasp the awesome potential for peaceful coexistence in the 21st century.

Domestically, in addition to today’s economic challenges, the would-be totalitarians on the left are becoming more aggressive by the month. Example No. 1: Two or three dozen armed agents raided former President Donald Trump’s Florida home, when a quiet visit by unarmed agents would have sufficed. Example No. 2: The first advertisements for tens of thousands of additional IRS agents asked for applicants who were willing to carry a gun and use deadly force—this, at the same time that Democratic leaders in Congress are conniving to find ways to disarm Americans who don’t work for the government. Example No. 3: A leading swamp actor, the Environmental Protection Agency (EPA)—still stinging from the rebuke of its illegal overreach by the Supreme Court in West Virginia v. EPA—took the ominous, Orwellian step of announcing that it will conduct “flyovers” to monitor methane emissions from Texas oil fields (even though methane—despite its pronounced heat-trapping capacity in laboratories—is irrelevant as a greenhouse gas, since water vapor absorbs infrared radiation at the same wavelengths).

Without a doubt, we need to identify threats to our rights and freedom, and to find effective ways to defeat those threats. A minority of Americans today may find it’s their vocation to work full-time to defend our rights (bless you!), but at this stage, at least, most of us should combine support for our freedom fighters with enjoyment of the daily life of being free to pursue our happiness. We don’t want to become a conservative version of the lugubrious left.

Indeed, the left, afflicted by what I call “the paradox of prosperity,” are a chronically gloomy lot. They chastise and denounce our good society for not being perfect, while ignoring great strides of progress from generation to generation. When they can’t find enough in the present to condemn, they dredge up historical figures from six, eight, 10 generations ago, and tell us how evil America is today because of those long-dead individuals.

They steadfastly seek reasons not to be happy. Progressives have chosen a forlorn life as full-time malcontents. Let’s not make the same poor choice. Our proper response to the down-in-the-dumps doomsters is to be happy, to enjoy life, to be grateful for our many blessings, and to love our country—and, yes, to chip in from time to time with prudent political involvement.

The great need for each one of us is to find the right balance in how much news we “consume.” Let’s be aware of the larger issues at stake, but let’s also refuse to give up the joy of daily life in “the land of the free and the home of the brave.”