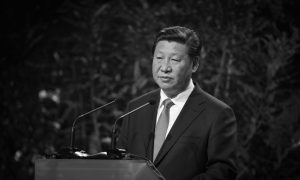 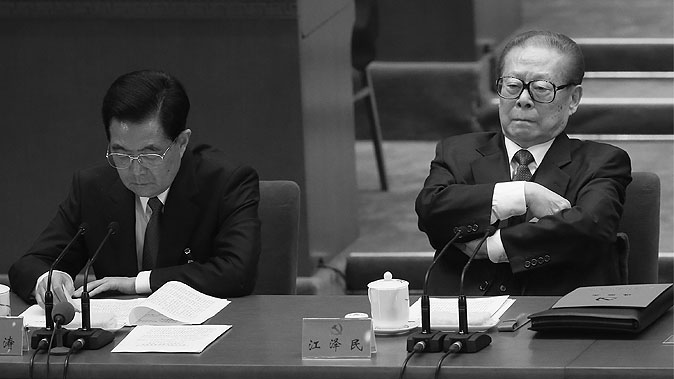 Former Chinese communist leader Jiang Zemin (R) attends the closing session of the 18th National Congress of the Chinese Communist Party on Nov. 14, 2012, in Beijing. Jiang is believed to be the ultimate godfather behind the plotting of Bo Xilai and Zhou Yongkang. (Feng Li/Getty Images)
China

Until recently such talk was to be found almost only in the overseas Chinese press. Among China specialists in the West it was often enough gently tut-tutted away. But now, major mainland Chinese websites are reporting the news: before they were both purged, the Communist Party’s former security czar held secret, seditious talks with a former Politburo member.

The cast of characters—Zhou Yongkang, the security chief, and Bo Xilai, the head of the southwestern city of Chongqing, and the offspring of a powerful revolutionary communist leader—could be drawn from the Chinese equivalent of a “Godfather” trilogy.

Zhou, who rose up through the state-run petrochemical industry, controlled a massive security empire with a budget of about $120 billion, greater than that of the military.

In his charge was the People’s Armed Police that, at a million strong, was the size of an army. He also gave orders to security agencies ranging from secret political police and spy forces, to courts, jails, regular police, labor camps, and more.

Bo Xilai was the son of the bruising revolutionary Maoist henchman Bo Yibo, and as part of the red nobility harbored boundless political ambition. He stirred up Maoist-style rallies and social policies in his own city of Chongqing, home to nearly 30 million, and made clear that he was gunning for a powerful Party post—maybe the top one.

Why were the two holding secret discussions in the sensitive period before the Communist Party’s once-in-a-generation political transition, which happened in late 2012?

They wanted to “do something big,” according to the article by Phoenix Weekly, a political magazine that is published in Hong Kong. Often, Hong Kong political reportage is used by Party leaders to guide public opinion or to release news that is advantageous to their political agenda.

Whether such articles are then reposted and circulated on major Chinese Web portals is often another bellwether of their political utility—and in this case, outlets like Hexun and Sina republished the news without censorship. Very quickly the news was all over China: Zhou Yongkang and Bo Xilai had conspired to promote their own form of neo-Maoist ideology, meant to replace the Party’s current power structure.

The article detailing the ties between the two said that Zhou met with Bo in Chongqing, when Bo was still Party secretary of the city. “According to sources, the main topic of the discussion was about how to completely negate Deng Xiaoping’s theory and implementation of reform and opening up,” states a summary of the article by Sina, a popular Chinese Web portal.

It continues that, “both men believed that the theory proposed by Mao in his later years—that the greatest conflict in Chinese society was the struggle between the proletariat and the bourgeoisie, between socialism and capitalism—was still correct, and that Deng Xiaoping’s theory of reform and opening up needed revising.”

In Chinese communist theory, this is known as a “line struggle”—fierce competition over the correct “line” of theory to apply to China.

And a line struggle in China also has another name: a power struggle over who controls the Party. “The term ‘line struggle’ is another way of saying ‘coup,'” said Shi Cangshan, an independent analyst of Party affairs based in Washington, D.C. “It means they were calling for regime change—that’s how people in the Party see this.”

The term ‘line struggle’ is another way of saying ‘coup.’ It means they were calling for regime change.
— Shi Cangshan, analyst of Party affairs

The Phoenix article said that Bo, true to his personality, was to help Zhou “rush it out there” (chong yi chong). The meaning of the Chinese phrase is that Bo would be the first to put forward the idea that Deng Xiaoping’s reform agenda has led to a dark mélange of problems, often the same ones cited by overseas critics: a heavily polluted environment, moral decay, a political structure shot with corruption, a yawning wealth gap, and so on. The neo-Maoists blame all this on the legacy of Deng.

Bo had in fact already started doing something like that with his populist social policies in Chongqing.

“Bo Xilai saw this Maoist-leftist sentiment growing among segments of the Party’s intelligentsia, and he co-opted it,” said Shi Cangshan. “He organized Maoist singing sessions, like the Cultural Revolution. His anti-mafia campaign was very much like the land reform campaigns before the revolution, where the rich have their assets stripped and handed out to the masses. He supported the Maoist-leftists and their websites, who openly attacked Premier Wen Jiabao. Do you think that kind of thing would be allowed if someone like Zhou Yongkang was not protecting them?”

Bo, of course, was an opportunist, not a true believer. He and his family are widely believed to have personally embezzled vast funds. “It’s just a way of seizing power,” Shi said. “Zhou Yongkang and Bo Xilai wanted to turn upside down the basis of the current system.”

In early 2012, the plotting between Bo Xilai and Zhou Yongkang—and others, higher up in the system—began to unravel. The flight of Wang Lijun, Bo’s chief of police, to the American Consulate in the city of Chengdu in February triggered revelations to Party central.

But foreign observers found it hard to believe that there was much to it at first. Bill Bishop, who runs a popular newsletter on China news, advised readers to “take with a grain of salt” reports that “a faction of hard-line nationalists within the party are seeking power,” as reported in early 2012 by the national security correspondent Bill Gertz. Epoch Times and the overseas Chinese-language website Boxun reported similar things. Yet the recent revelations in the Chinese press point precisely to such a scenario.

The Associated Press in March 2012 quoted Huang Jing, a professor at the National University of Singapore’s Lee Kuan Yew School of Public Policy, saying that “Bo seems to have at least guaranteed himself a ‘soft landing,'” and that “if Bo were to be removed from office and placed under investigation, this would cause enormous instability for the regime and the current leaders don’t want that. … It’s in their interest to close off the case as soon as possible without causing too much damage.”

The idea that even Zhou Yongkang, the former security czar, would be arrested, expelled from the Party, and put to trial seemed even more far-fetched, and for a long time was hardly countenanced among the Western-facing China cognoscenti.

No one believed it was the case, but developments have shown it. Maybe we were a little early.
— Xia Xiaoqiang, news columnist for the Chinese Epoch Times

Yet both these ideas were quickly predicted and circulated in the overseas Chinese media in 2012, including in both the English and Chinese-language editions of the Epoch Times.

“In February, when Wang Lijun fled to the consulate, I published a piece saying that Bo Xilai’s prospects are grim,” said Xia Xiaoqiang, a political columnist for the Chinese edition of the Epoch Times, called Dajiyuan in Chinese, based in Europe. Xia was an officer in the Chinese military in the 1980s and maintains contact with personnel in China. He said that the newspaper’s Chinese reporters and editors have “extensive inside sources,” which inform both the reporting and his own analysis and predictions.

“Later I published a piece saying that Zhou Yongkang was behind the scenes, and that he’s also going to have big problems,” Xia said. “No one believed it was the case, but developments have shown it. Maybe we were a little early.”

Watson Meng, the editor of the website Boxun, also published reports discussing a conspiracy of sedition by Bo Xilai and Zhou Yongkang. “Chinese politics is a black box. If you go strictly according to Western journalistic requirements, many things are hard to verify.”

He acknowledged that insider tips are often given at the bidding of a faction in the Party that wants to get its message out. “We don’t care about their purpose, just whether it’s reliable.”

Xia Xiaoqiang presented the overall framework that he said he has used to inform his own analysis of the twists and turns of recent Chinese political struggle.

“Why did these guys form a conspiracy to take power? Because Jiang Zemin’s people were out of power, and they were worried that the political legacy of the persecution of Falun Gong would come back to haunt them.”

Many power struggles in the Chinese system have been fought around mass political campaigns—the most famous are Mao Zedong’s Great Leap Forward and Cultural Revolution, which saw him face off and tear apart the rest of the Party establishment to preserve his own power and defend his disastrous policies.

Later, the massacre of students around Tiananmen Square in 1989 formed another core group of hard-line cadres who conspired to ensure that there was no public examination of the slaughter of the students, so that they would never be held accountable.

The persecution of the Falun Gong spiritual practice followed a similar formula: Jiang Zemin, in July of 1999, declared the group an enemy of the Party and the people, and launched a sweeping, national campaign to vilify and eradicate it.

In a letter to the Politburo earlier in the year he cast the practice—which consists of meditative exercises and moral precepts taught freely—an ideological enemy. Official statistics from the period put the number of practitioners across China at 70 million—an enormous population to turn into an enemy overnight.

Violence perpetrated against Falun Gong in the persecution includes excruciating and meticulously prepared varieties of torture—roasting, electric shocks, a constellation of stress positions, rape and, researchers say, the harvesting of tens of thousands for their vital organs while they are still alive, which kills them.

“Zhou Yongkang and Bo Xilai were Jiang Zemin’s operatives, and their political careers were inseparable from that campaign,” Xia Xiaoqiang said. “On no account did they want that coming back to them, and they could not allow the persecution to stop.”

In fact, under the rule of Xi Jinping the persecution of Falun Gong has not stopped, as documented most recently in a report by Freedom House.

But Xi Jinping has seen to changes that could never have taken place in a Jiang-led regime: the chief of the 610 Office, the extrajudicial Party security agency established to coordinate and implement the persecution campaign, was expelled from his post and purged. He wore a variety of hats, but his anti-Falun Gong hat was the first mentioned in the notice of his expulsion from the Party. The system of re-education through forced labor, one of the chief places of detention of Falun Gong practitioners, has also been dismantled. Zhou Yongkang has been stripped of his power and faces trial.

Even so, Xi Jinping’s own ideological and security controls so far present little reason to expect a shift in the Party’s long-established systems of repression. “It’s the nature of the system to use propaganda and violence,” Xia Xiaoqiang said.