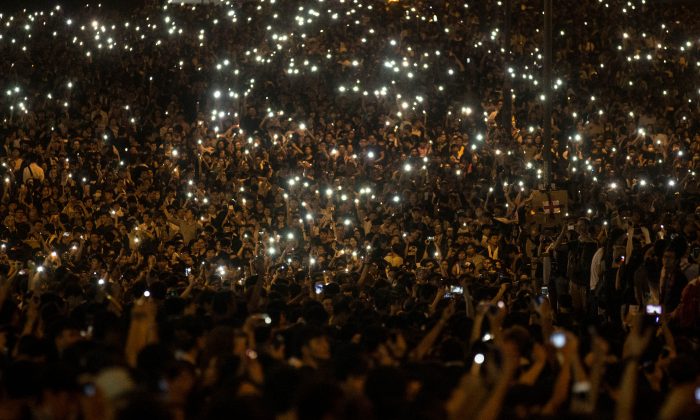 Protesters wave their cell phones in the air in the streets outside the Hong Kong Government Complex on September 29, 2014 in Hong Kong. The information of Hong Kong protest has been blocked in mainland China, but many mainland Chinese still made their voice out to support on the internet. (Chris McGrath/Getty Images)
China

Mainland China’s authorities fear the power of the example of protests for democracy in Hong Kong, and are working to block news of it from reaching the Chinese people.

Those protests seized the world’s attention on Sunday night, as Hong Kong’s police used tear gas and pepper spray to disperse tens of thousands gathered in the central business district to demand universal suffrage. According to a police statement, 87 canisters of tear gas were fired into the crowd.

A microblog post by a Chinese netizen gives an idea of what has the Chinese authorities worried.

“One can see the imperial [Chinese Communist Party] government’s dictatorship through this incident of the Hong Kong citizens’ peaceful disobedience,” wrote Dai Zhaojun, who identifies himself as a citizen in Guangdong Province. “It uses violence to take democracy away from the Hong Kong people, which disappoints the Hong Kong people, the people of mainland China, and the whole world.”

“Dictators will always be eliminated, and democracy can’t be stopped,” wrote Dai.

According to the author, commentator, and veteran of the 1989 Tiananmen Square student protests, Chen Pokong, “The Chinese Communist Party has always blocked news about democratic demands in Taiwan and Hong Kong. The Party doesn’t want the demands for democracy in Hong Kong spreading to the mainland.”

“They don’t want a democratic contagion in mainland China, with Chinese also calling for democracy,” Chen said in a phone interview.

Dai’s post was available through a service curated outside of mainland China called “Free Weibo,” which archives posts made on the Twitter-like service Weibo that are deleted by China’s censors.

None of the photos or accounts of the dramatic events on Sunday night published in media outside China were available through China’s heavily censored Internet.

Netizens like Dai would have had to make use of anti-censorship software. Products like Freegate, made by the U.S.-based Dynamic Internet Technology, allow users to “jump the wall”—defeat the censorship imposed by the “Great Firewall” and gain access to the Internet outside of China.

Dai’s post was one of an indeterminate but large number responding to the events in Hong Kong. An examination of Free Weibo’s posts shows that in the 8.5 hours from 7 p.m. on Sept. 29 to 3:30 a.m. on Sept. 30, there were over 1,000 posts about the Hong Kong protests deleted from Weibo. The limitations of Free Weibo did not allow a search that went further into its log of posts.

While some of the posts were simply asking for information, most of them show strong support for the demonstrations in Hong Kong.

The Hong Kong protests on Sunday night grew out of a student strike that began Sept. 22. The students were protesting with sit-ins on their campuses and in Hong Kong’s central business district for universal suffrage—the principle of one person one vote.

The 1984 Sino-British Joint Declaration, which set forth the terms for the United Kingdom’s handover of Hong Kong to the People’s Republic of China in 1997, promised Hong Kong democratic elections. More recently, Beijing had promised Hong Kong would be granted universal suffrage by the 2017 election for chief executive—Hong Kong’s next election for the top post.

A decision issued on Aug. 31 by the Standing Committee of the National People’s Congress—the Chinese regime’s rubber-stamp legislature—determined that nominees for the 2017 election would be chosen by a nominating committee that is in effect controlled by Beijing.

The decision was greeted by pro-democracy Hong Kongers as a betrayal, and set the stage for the recent protests.

The movement Occupy Central With Love and Peace had been organized earlier this year to lead civil disobedience in Hong Kong should universal suffrage not be forthcoming. It began staging events in an attempt to involve more Hong Kongers in protests for universal suffrage.

The organizers of Occupy Central seized on the moment to move up the beginning of their protests—scheduled for early October—to Sunday. By Sunday night, tens of thousands were crammed into the protest site, until police began driving them out with tear gas.

While the police succeeded in dispersing the crowds on Sunday night, their action seems to only have inflamed the desire in Hong Kong for peaceful confrontation. On Monday, news reports say there are more protesters, in more locations, than on Sunday.

Liu Hai, who identifies herself as from Nanchang City, the capital of southeastern China’s Jiangxi Province, used anti-censorship software to post to Facebook outside China a call for support for Hong Kong. Her post reflects the excitement visible in many of the censored messages: “Support Hong Kong! If you [the protesters] hang back, our situation today will be your situation tomorrow!!!”

In the mainland’s official news, there has been very little notice of Occupy Central and the protests in Hong Kong except to criticize them as “illegal activity.”

The popular photo and video sharing app Instagram started to be blocked in mainland China beginning Sunday afternoon, as photos of the protests had been available through the program. Instagram now joins Facebook, Youtube, and Twitter as social media platforms that are blocked in China.

The spokeswoman of the Ministry of Foreign Affairs, Hua Chunying, warned foreign countries to “be cautious with their speech,” “not to support Occupy Central,” and “not to interfere with Hong Kong affairs,” during a Monday press conference.

According to Chen Pokong, the Chinese regime’s authorities are not sure how to respond.

“The Communist Party did not expect that there would be demands like this, or that the Occupy movement would be so robust,” Chen said. “They thought there were many conservatives in there, or groups with differing views, so they never thought it would be this big.”

“It really took them off guard. They’re shocked, panicking, and don’t know how to deal with it.”

Heng He, a commentator on China who writes regularly for Epoch Times, explained in an email why he believes the situation in Hong Kong is so difficult for authorities to deal with.

“Currently, the Chinese Communist Party is experiencing a major crisis that involves an internal power struggle, a faltering economy, and social unrest,” Heng He said. “The whole nation is waiting for something big to happen.”

“The dried brush is everywhere, and a small spark can cause a huge fire. What the Party most fears is that the Hong Kong protests will encourage the Chinese people to do the same,” Heng He said.

“If the Chinese people demand political change and their own rights, this could shake, or even end, the Chinese Communist Party’s rule.”

With additional reporting by Matthew Robertson.