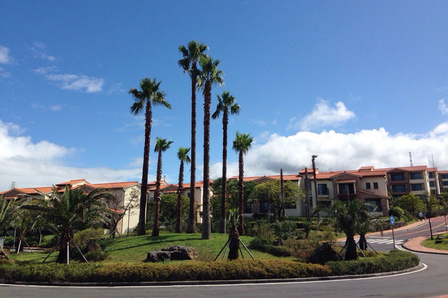 30 percent of those living in these upscale villas on Jeju Island are Koreans and 60 percent are Chinese. Here, the Chinese people do not have to worry about language problems, because the signs are in Chinese. Just like that, a Chinatown on Jeju Island, Korea. (Epoch Times Archive)
Asia & Pacific

Mainland Chinese tourists and investors are rushing capital into South Korea’s Jeju Island at an alarming rate due to an inviting policy called Investment Immigration.

To encourage development of Jeju Island, a scenic resort island known as a famous filming site for Korean dramas, island officials instituted the policy in February 2010. Its terms require foreigners to invest 500 million Won (US$472,010) in resorts, restaurants, or other recreation properties on Jeju Island in exchange for permanent resident status in South Korea.

After a period of five years, an investor is given permanent resident status and allowed access to education and medical benefits.

Jeju Island is also a prime real estate source for fleeing Chinese Communist Party (CCP) officials and wealthy businessmen who are moving their assets overseas, fearing that the regime is in danger of collapse.

According to reports by mainland media, after sweeping the European and North American real-estate markets, mainland Chinese investors are looking toward the nearby South Korea.

The Korea Trade Investment Promotion Agency (KOTRA), released data showing that by the end of September 2013, the number of foreign visitors to Jeju Island exceeded 2 million, with 75 percent or 1.5 million from mainland China.

The data indicates that Chinese investors are not only investing in Jeju Island real estate as master developers of tourism and recreation properties, but also establishing consortiums to develop small- to medium-sized resorts.

Jeju Island residents have expressed discontent over the large inrush of Chinese capital and new residents, comparing the island to China’s Hainan Island (an island province of mainland China known for its tourism).

The Jeju Island government is now considering increasing the minimum investment amount to 1 billion Won (US$943,574), thus limiting the number of foreigners who can obtain permanent resident status to approximately 6000. Officials recognize that over-development of the island could be damaging to the environment, and the influx of increasing numbers of property owners will potentially erode South Korea’s sovereignty over its own land.