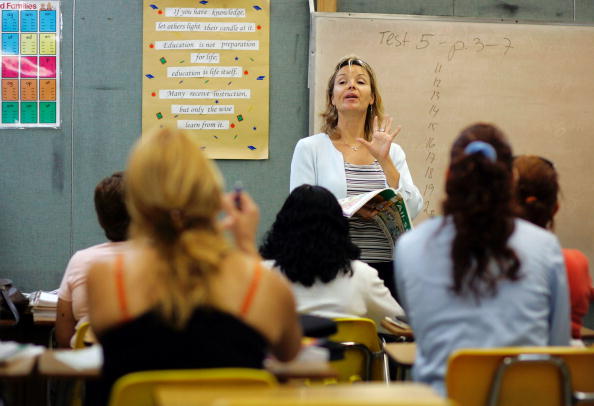 An English teacher in Miami, Florida. (Photo by Joe Raedle/Getty Images)
US

A Maine high school unable to fill a vacant teacher position has turned to a foreign language computer program to educate students.

With money already earmarked for the job, The Morning Sentinel reports Madison Area Memorial High School opted to purchase the Rosetta Stone program to serve as its full-time French and Spanish teacher.

The school was forced to purchase the program, which is currently used in more than 4,000 schools nationwide, when no one applied.

Rosetta Stone officials say the program is ideally used in conjunction with a live teacher.

An education technician was hired to supervise the school’s students and administer the program.

“This isn’t perfect, but it was the best option to move our students forward this year,” Ward said.

“It was coming down to the wire and school was starting,” Ward said in explaining the move, reported CentralMaine.com. “Students were already scheduled for foreign language, and we can’t just not offer it.”

Ward added that the ideal scenario would be to hire a teacher.

A spokesman for Rosetta Stone told the website that “it’s a way for schools to still provide that high quality language instruction.”