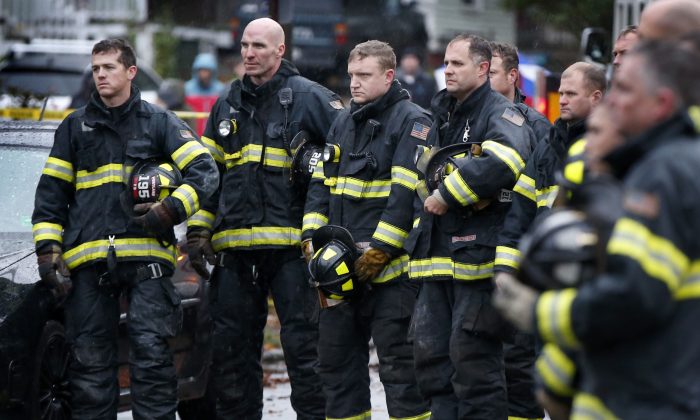 Firefighters take their helmets off as a body is removed from the scene of a fatal apartment building fire in Portland, Maine on Saturday, Nov. 1, 2014. Earlier in the morning, a fatal fire swept through a two-apartment building housing students from the University of Southern Maine. (AP Photo/Robert F. Bukaty)
US

PORTLAND, Maine—Fire swept through an apartment house near the University of Southern Maine’s quiet commuter campus Saturday, killing five people and critically injuring one, authorities said. It was unclear if any of the victims were students.

The fire, which gutted the two-story, 90-year-old structure, followed a Halloween party the night before. The building housed two apartments.

State fire marshal’s spokesman Steve McCausland said most, if not all, the residents of the house were USM students but said there was no indication that students were killed in the fire. Later Saturday, Portland Fire Chief Jerry LaMoria said they didn’t know if any of the victims were students.

Initial reports also said several people were unaccounted for, but later authorities were unsure how many, if any, were still missing.

Anxious students spent the day trying to get information about what happened.

“Everyone is just trying to find out if their friends are hurt,” said Sam Hill, the editor of the university’s paper.

A few students visited the student union where Red Cross workers offered counseling and comfort. As they came and went, students hugged each other; some cried. The campus, which has no residential housing, otherwise was still as usual for a weekend.

“It’s definitely kind of a shock that something like this could happen so close to home,” said Joshua Dodge, a student Senate member. “If students were involved, these are people we see every day.”

One person suffered severe burns and jumped from a second-story window. He was reported in critical condition in the burn unit of a Boston hospital, McCausland said. A second person was treated and released from a hospital; seven people escaped from the burning building.

Two bodies were found on the second floor and two others on the third floor.

University President David Flanagan said at least one of the people who escaped was a student.

Damien Croxford of South Portland was driving through the area on his way to work when he saw the house in flames and the entire neighborhood cloaked in smoke. He said he found a badly burned person lying in the street breathing and conscious after he called 911. Croxford said he spoke with people who had evacuated the home who said they were unsure how many people were inside during the fire.

Croxford said the heat from the fire was so intense that he had to back away from the scene.

“It’s going to stay with me for a long time,” he said. “A prayer for the families.”

The fire, Maine’s deadliest since a 1984 blaze killed five in Hartland, ripped a hole through the roof of the house and both apartment units were badly burned.

Nathan Long, who said he woke up to the smell of smoke when his alarm clock went off, told the Portland Press Herald that he didn’t hear any fire alarms going off. He yelled “fire!” and ran to the back of the house, where another person was opening a window. They both jumped onto a porch roof, then to the ground, where he saw the badly burned body of another person.

“I feel pretty lucky. I’m kind of numb,” Long told the newspaper. He said he lived with four other people and that he didn’t know the fate of his roommates beyond the one with whom he escaped.

Investigators have interviewed all the people who escaped and are still working to identify the victims.

LaMoria said they still don’t know where the fire started. The investigation is in a preliminary stage and officials will look into whether there were any code violations in the home.

“It’s just awful when you have that many people involved and hurt,” Krigman said.

The university announced the Red Cross help at the student union, where students could gather, exchange information and support each other.

“It’s a tragic situation,” said university spokesman Chris Quint said. “Our hearts and thoughts go out to the families of those injured in this tragedy.”

Portland Mayor Michael Brennan said the city will come together to support the families, the victims and others affected by the fire.

The Press Herald reported the house was built in 1920 and is owned by Gregory Nisbet. A phone number listed in his name was out of service Saturday.