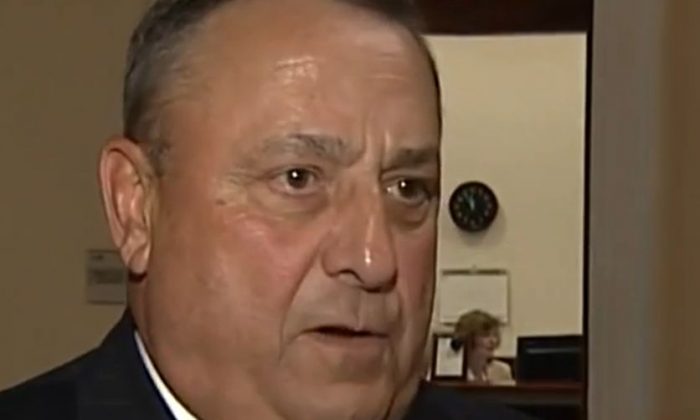 A screenshot of WMTWTV shows Gov. Paul LePage.
US

Maine Gov. Paul LePage recently joked about blowing up newspaper buildings in his state, fueling a spat with one of the largest publications in Maine.

He later said that he would hit the Press Herald and the Bangor Daily News when another reporter asked him.

A LePage spokesperson, Adrienne Bennett, told the Press Herald that he was obviously joking.

There was some public backlash toward his comments.

“Threatened? It was a joke, folks,” he replied on Twitter.

“Of course it was a joke,” Jim Melcher, a political science professor with University of Maine, told the paper. “I don’t think it will bother any of his supporters, and it won’t change the bigger picture. It will remind people on both sides why they feel the way they do.”

Several Portland Press Herald sent out Twitter messages, saying they would give out the “coordinates.”

“Unfortunately our governor has a misguided sense of humor,” she wrote. “That kind of a joke is irresponsible in this day and age, especially when it comes from the leader of our state.”

The spat highlights the division between LePage and Maine’s largest newspapers. In June, he issued a gag order barring officials in his administration with speaking to reporters from the Press Herald after several critical articles about his office.

LePage once said that reading a newspaper is “like paying somebody to tell you lies,” reported The Associated Press.