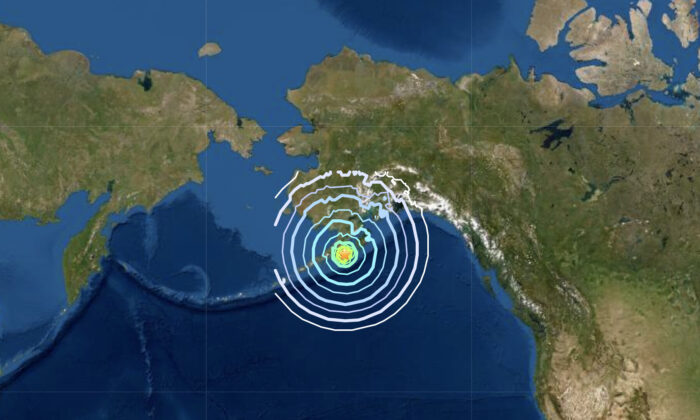 A map showing the location of a magnitude 6.9 earthquake off the coast of Alaska on Oct. 11, 2021. (USGS/Screenshot via The Epoch Times)
Regional News

JUNEAU, Alaska—A magnitude 6.9 earthquake struck off the coast of Alaska early Monday in what the Alaska Earthquake Center called an aftershock of a 8.2 quake from late July.

Monday’s earthquake was felt throughout the Alaska Peninsula and Kodiak Island, according to the Alaska Earthquake Center.

The center had not received reports of significant damage but also relies on self-reporting, said seismologist Natalia Ruppert. Jeremy Zidek, a spokesperson for Alaska’s emergency management office, said the office was contacting communities and had no reports of damage so far.

The U.S. Geological Survey on Twitter had reported a preliminary magnitude of 6.5 that was later revised to 6.9, which ties another earthquake that hit Alaska in August.

Ruppert said aftershocks from the July earthquake could continue for “many, many more months.”

She said the region is seismically active, and it’s not unexpected for such a large quake to have aftershocks greater than a magnitude 6.