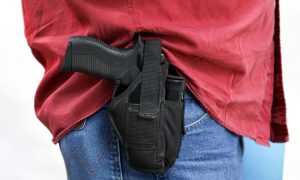 A map of the 5.3 magnitude earthquake that hit Idaho on Sept.2. (Screenshot via United States Geological Survey)
US

One of the strongest quakes to hit the region of Idaho in years occurred over the weekend from Saturday, Sep. 2 to early Sunday morning.

Southeast Idaho was hit by a moderate magnitude 5.3 earthquake, according to the U.S. Geological Survey (USGS).

Apart from the major quake, there were also 41 smaller quakes that took place later as well, Idaho State Journal reported.

According to the KTVB-TV, the damage should have only be slight. Earthquakes with a magnitude of 5 could cause property damage but not have a severe impact.

Authorities said there were no immediate reports that the quakes caused any injury to people or any damage to structures.

The center of the quake’s location was 11 miles East of Soda Springs, Idaho, with people in Wyoming feeling the tremors as well. It was also felt across Northern Utah in Logan, Ogden, Salt Lake City, Draper, and Provo.

USGS reported that four of the smaller quakes on Saturday evening took place in the area about 63 miles from Pocatello and 130 miles from Salt Lake City.

The smaller quakes followed successively for about an hour afterward, ABC News reported.

The largest earthquake ever recorded in Idaho was back in 1983—the Borah Peak earthquake, which had a magnitude of 6.9. That’s about 250 times stronger and 40 times larger than this most recent Saturday quake, according to the U.S. Geological Survey.

Below is some advice from the  U.S. Department of Homeland Security on what to do during an earthquake.

If you are inside a building:

Cover your head and neck with your arms to protect yourself from falling debris.

If you are in danger from falling objects, and you can move safely, crawl for additional cover under a sturdy desk or table.

If no sturdy shelter is nearby, crawl away from windows, next to an interior wall.

Stay away from glass, windows, outside doors and walls, and anything that could fall, such as light fixtures or furniture.

Hold on to any sturdy covering so you can move with it until the shaking stops.

Stay where you are until the shaking stops. Do not run outside. Do not get in a doorway as this does not provide protection from falling or flying objects, and you may not be able to remain standing.

If getting safely to the floor to take cover won’t be possible:

If getting safely to the floor will be difficult, actions before an earthquake to secure or remove items that can fall or become projectiles should be a priority to create spaces.

Identify an away from windows and objects that could fall on you. The Earthquake Country Alliance advises getting as low as possible to the floor. People who use wheelchairs or other mobility devices should lock their wheels, bend over, and remain seated until the shaking stops. Protect your head and neck with your arms, a pillow, a book, or whatever is available.