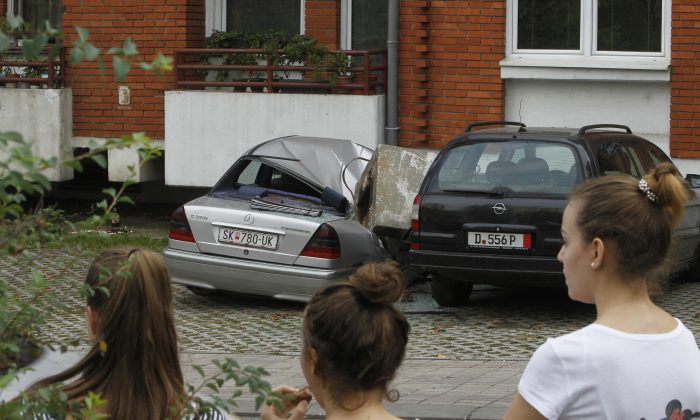 Girls look at a car, demolished by a concrete block after an earthquake in Skopje, Macedonia, Sunday, Sept. 11, 2016. Macedonian authorities say an earthquake with a preliminary magnitude of 5.3 struck on the outskirts of the capital, Skopje, Sunday causing minor damage to buildings but no injury. (AP Photo/Boris Grdanoski)
International

SKOPJE, Macedonia—An earthquake with a preliminary magnitude of 5.3 struck on the outskirts of Macedonia’s capital on Sunday, injuring at least 30 people and causing minor damage to buildings, authorities said.

She said she received reports of cracks in the walls of buildings or collapsed chimneys, as well as damage to roofs in villages around Skopje.

The U.S. Geological Survey also gave the quake a preliminary magnitude of 5.3, with its epicenter about four kilometers 4 kilometers (2 ½ miles) east-northeast of Skopje, at a depth of 10 kilometers (six miles). The Potsdam-based German Research Centre for Geosciences, or GFZ, gave a magnitude of 5. Earthquake experts often give different estimates of magnitude.

Cernih said at least four strong aftershocks followed the big quake, while a smaller quake was recorded earlier in the day.

A large earthquake in 1963 leveled much of Skopje, killing more than 1,000 people.