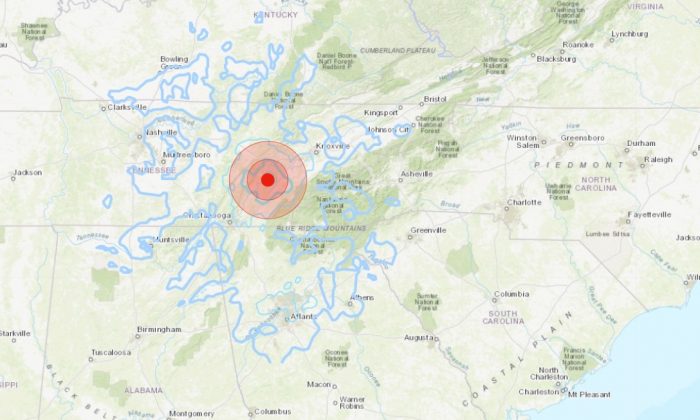 A 4.4 magnitude earthquake struck in Tennessee and was felt in Atlanta, according to the U.S. Geological Survey (USGS).
US News

A 4.4 magnitude earthquake struck eastern Tennessee and could be felt as far away as in Atlanta, according to the U.S. Geological Survey (USGS).

There did not appear to be any immediate reports of damage to property or injuries associated with the quake.

Quakes East of Rockies Felt More Intensely Than In West

“An earthquake is caused by a sudden slip on a fault,” the USGS writes. “The tectonic plates are always slowly moving, but they get stuck at their edges due to friction. When the stress on the edge overcomes the friction, there is an earthquake that releases energy in waves that travel through the earth’s crust and cause the shaking that we feel.”

Scientists say that neither the USGS nor any other scientists have ever predicted a major earthquake.

“We do not know how, and we do not expect to know how any time in the foreseeable future,” the USGS writes.

The USGS says that unlike earthquakes west of the Rocky Mountains, many of which are linked to mapped geologic faults like the San Andreas fault system, most of the earthquakes in North America east of the Rockies occur as faulting within bedrock, usually miles deep, and are—except in a limited number of cases—not associated with known fault lines.

This makes eastern earthquakes more of a mystery because they do not take place at a plate boundary where most other earthquakes originate.

“Scientists have tried many different ways of predicting earthquakes, but none have been successful,” the USGS writes. “On any particular fault, scientists know there will be another earthquake sometime in the future, but they have no way of telling when it will happen.”