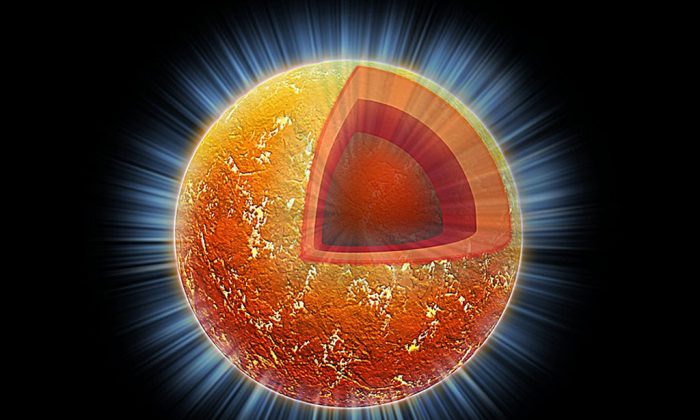 Magnetic Fields of Neutron Stars Explained: ‘Like Cream in Coffee’

Neutron stars are very dense and are created when big stars collapse. They have some of the strongest magnetic fields in the universe—as much as a billion times more powerful than any man-made electromagnet.

Previous models suggest that the magnetic field of a neutron star should break into smaller loops and dissipate as the star ages—a phenomenon known as turbulent cascade. But some stars that are roughly one million to a few million years old have relatively strong fields.

To better understand how the magnetic field changes as a neutron star ages, physicists at McGill University ran a series of computer simulations. These showed the magnetic field evolving rapidly at first, in line with previous predictions.

But then the evolution took a surprising turn: in all the simulations, no matter what the magnetic field looked like when the neutron star was born, the field took on a particular structure and its evolution dramatically slowed.

“The original prediction was that neutron star crusts would do the same to their magnetic fields; so if you could walk around on the surface with a compass trying to walk towards magnetic north, you would end up walking around in random directions.

“Instead, we find in these new simulations that the magnetic field actually remains quite simple in structure—as if the cream refused to mix into the coffee—and you could, indeed, use a compass to navigate around on the surface of the star.”

The McGill researchers call this final magnetic-field configuration the “Hall attractor” state, after the so-called Hall effect, which is thought by astrophysicists to drive magnetic field evolution in neutron-star crusts.

“This result is also significant because it shows that the Hall effect, a phenomenon first discovered in terrestrial materials and which is thought to help weaken a magnetic field through turbulence, can actually lead to an attractor state with a stable magnetic-field structure,” Konstantinos Gourgouliatos says.

The findings, published in Physical Review Letters, could help scientists measure the mass and radius of these unusual stellar bodies, and thereby gain insights into the physics of matter at extreme densities.