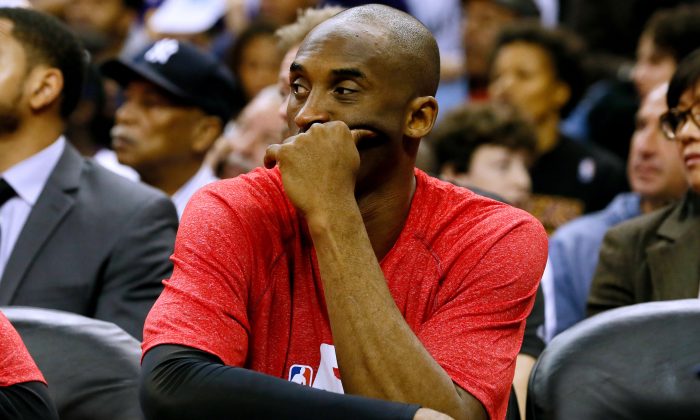 In this Wednesday, Jan. 21, 2015, file photo, Los Angeles Lakers guard Kobe Bryant sits on the bench during the first half of an NBA basketball game in New Orleans. (AP Photo/Jonathan Bachman, File)
NBA

Lakers legend Magic Johnson says Kobe Bryant should demand the team make improvements or else threaten to not play next season.

As the Lakers struggle this season with one of the worst records in the league, focus is increasingly turning toward the offseason.

Magic said during an interview Tuesday on ESPN’s “First Take” show that the team’s executive vice president of basketball operations Jim Buss needs to snag one of the top free agents, or else Kobe shouldn’t play.

“If he doesn’t have a big summer with a free agent, it looks like they’ll have a good draft pick. Put that together with a good free agent, you can be right back into the mix. If this summer, that doesn’t happen where they can sign a great player, it’s over for us,” Johnson said.

The Lakers will keep their first-round pick if it is one of the top five. That means Los Angeles would need to keep losing a lot of games, which they likely will. If the pick is above the top five, the pick goes to the Suns as part of the Steve Nash trade.

Although a number of top players are set to hit free agency, many are expected to return to their teams–including Tim Duncan, Marc Gasol, LeBron James, and Kevin Love. There should, though, be at least one top free agent–Goran Dragic–and others that have been linked to L.A. in the past, including Rajon Rondo.

“And I really believe this: [Kobe] should … say to Jim and them, ‘Look, if you don’t sign one of these free agents [this offseason], man, I’m just not going to play next year,'” Johnson said.

Kobe has one more year left on his contract and has expressed his intention to play next season despite suffering another major injury this season.

“You almost gotta say that because if you come back with the same level of talent, you’re just going to have the same results,” Johnson said. “You know, so, look, Kobe, put pressure on Jim to say, ‘Look, man, you’ve got to bring me some talent, some help, so that this can be a great season for the Lakers and a great season for me, being my last season, and then I can retire.'”