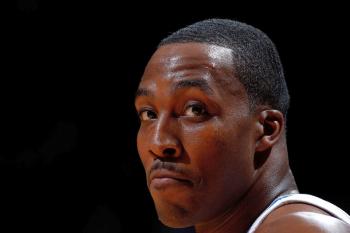 Dwight Howard proved he was worthy of Shaq's title against the Cleveland Cavaliers on Sunday, leading Orlando with 22 points for the win. (Kevin C. Cox/Getty Images )
NBA

By Dan Pomerleau
Print
The Orlando Magic kept their composure and fought through a tough challenge from the Atlanta Hawks on Thursday night in Game 2 of their Eastern Conference semifinal series to win 112–98.

The game was in stark contrast to Tuesday’s 43-point rout by Orlando. This game was a battle throughout until Orlando eventually pulled ahead in the fourth quarter.

Led by Dwight Howard with 29 points and 17 rebounds, Orlando’s starters delivered an impressive performance; all but Matt Barnes broke the 20-point mark. Atlanta could do nothing to answer Orlando’s inside-outside game down the stretch.

Of particular importance was Howard shooting 13–18 from the foul line. Superman has struggled with his foul shooting for a long time now, and it appears he’s broken through whatever his mental block was.

The game was neck-and-neck until the fourth quarter.

“The main thing [in the second half] was getting defensive rebounds; they were killing us on the glass,” Howard told ESPN after the game.

“In the second half we looked like the Orlando Magic,” Vince Carter said.

Atlanta failed to connect despite good looks and Orlando outscored Atlanta 28–11 to finish the fourth quarter.

Despite the letdown, Atlanta displayed their playoff caliber with a total team effort.

The Hawks must make the most of home-court advantage beginning on Saturday and prevent going down 3–0.