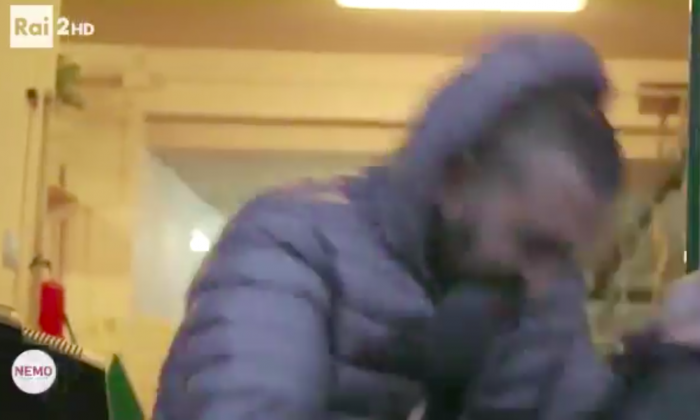 A TV reporter was assaulted while interviewing a man whose family has been tied to the mafia in Ostia, Italy, on Nov. 9, 2017. (Screenshot via Rai TV)
Europe

Police in Italy arrested a man on Thursday, Nov. 9, for a vicious attack on a television journalist that was caught on camera, reports the BBC.

Roberto Spada was being interviewed when he delivered a savage head-butt to Rai TV journalist, crushing the reporter’s nose. Spada then pulled out a blackjack and swung it at the reporter and television crew, according to the BBC report.

The assault took place at a Spada family gym in the coastal town of Ostia, near Rome, prompting journalists to rally in solidarity in front of the establishment on Nov. 10.

Rome’s mayor was quick to condemn the attack.

Mayor Virginia Raggi tweeted a video of it with the caption: “The Spada clan’s violence is unacceptable. Solidarity with the journalist and filmmaker of @NemoRai2 attacked in Ostia. We will stop crime and extremism in Rome.”

The act of aggression occurred while journalist Daniele Piervincenzi was interviewing Spada about his family’s alleged links to CasaPound, a political movement considered extreme to the right.

CasaPound won an unexpected 9 percent of the vote in a Sunday municipal election in Ostia.

The vice president of CasaPound, Simone Di Stefano, invited a public investigation into the movement, “to see if there are criminal ties between us and the Spadas,” reports ANSA.

“We are requesting swift and public probes, and that the results should be spread to the public.”

Investigators are weighing whether Spada’s attack occurred in a “mafia context,” reports ANSA.

On Oct. 4, seven members of the Spada family were sentenced to a total of 50 years in jail for racketeering in Ostia.

Spada’s brother is now serving 10 years in jail for extortion and mafia links.