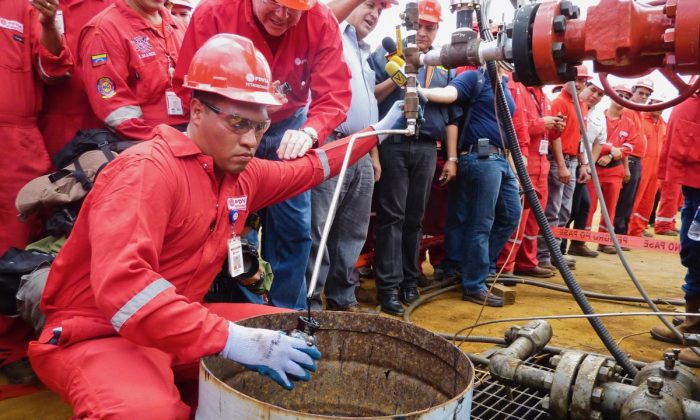 Venezuela’s government has named Asdrubal Chavez, a former oil minister and cousin of the late leader Hugo Chavez, as the as the new president of U.S.-based refiner Citgo a day after authorities arrested the president and six board members of the company.

They took the executives, four of which were reportedly American citizens, into custody at a company function in Caracas on Tuesday, Nov. 21 under the pretense of an anti-corruption probe.

The executives are being accused of arranging a $4 billion financing deal with two foreign investment firms, one in the United States and one in Dubai.

Venezuelan state Prosecutor Tarek Saab told a news conference on Tuesday that the deal offered the refiner as a guarantee in the deal.

Citgo, though based in Texas, is a subsidiary of Venezuela’s PdVSA, a state-owned natural gas and oil company. Fifty executives from PdVSA have been arrested since Saab took office in August, The Wall Street Journal reported.

“Organized crime has been taking root in the ranks of PdVSA,” claimed Saab, according to The Wall Street Journal.

However, insiders at the company have said the arrests indicate a struggle for loyalty within the upper echelons of Venezuela’s troubled government rather than a wish to punish corruption, according to The Washington Post.

Saab has promised to arrest more oil executives in his “all-out fight to clean up the oil industry,” reported Bloomberg.

The current meddling in Venezuela’s main economic engine, oil, is seen by many as a way to cement socialist dictator Nicolás Maduro’s control over the government and economy. Over the summer, Maduro took bold steps to secure his power by bypassing Venezuela’s National Assembly and creating a Constituent Assembly that has the power to rewrite the country’s constitution.

“Money is running out, the economy is about to collapse and the government is looking for a scapegoat—corruption—ahead of what appears to be one the most difficult years in the Chavez era,”  Diego Moya-Ocampos, a political risk analyst at IHS Markit told Bloomberg.

The oil sector is the last of what little remains of Venezuela’s economy, and its falling output, likely due to eroding infrastructure, has put pressure on Maduro’s government to keep the economy from collapsing.

“Saab is not doing this because he is devoted to the rule of law,” Phil Gunson, a Caracas-based analyst for the International Crisis Group, told Bloomberg. “He’s doing this at the behest of his political master, who one assumes to be Nicolas Maduro.”

According to The Washington Post, the arrests are meant to elicit loyalty from oil executives who are seen as preferring more moderate political opponents of Maduro, especially those who have broken with him in recent months.

Maduro made the announcement about Chavez’s cousin taking over as the new president of Citgo in a state television broadcast on Wednesday.

Writing news takes a lot of people and resources. Please help us continue to do this important work by sharing this article with your networks.