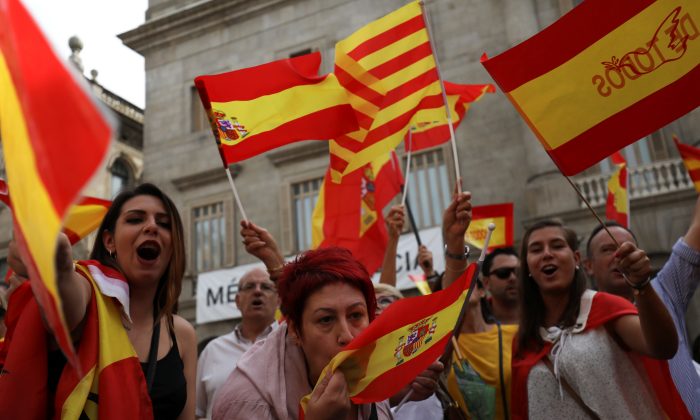 A woman kisses a Spanish flag as protesters hold Spanish and Catalan flags during a demonstration in favor of a unified Spain a day before the banned Oct. 1 independence referendum, in Barcelona, Spain, Sept. 30, 2017. (Susana Vera/Reuters)
Europe

Madrid Scornful as Catalan Leader Waters Down Declaration of Independence

Catalonia’s leader backed away from an attempt to formally implement independence from Spain on Tuesday, Oct. 10, sidestepping a constitutional clash by merely signing a symbolic declaration.

The announcement, which came during a highly anticipated speech, disappointed many supporters of Catalan independence, and drew scorn from the Spanish government.

Catalan leader Carles Puigdemont called for talks with Madrid over the region’s future, in a move that allayed concerns that Spain was on the brink of a political crisis, and sent the euro soaring.

Some analysts said that the compromise will only prolong the crisis.

Spain’s deputy prime minister described Puigdemont as someone “who does not know where he is, where he’s going,” according to the BBC.

Spain has been in turmoil since Oct. 1 when Catalonia held a referendum, which had been declared unconstitutional by the Constitutional Court of Spain.

Puigdemont faces possible arrest for his role in going ahead with the referendum.

Prior to his speech on Tuesday evening, supporters had hoped he would call a vote for a motion for formal independence in the regional Parliament. Instead he signed a proclamation of “full sovereignty,” which has unclear legal value, but avoids a constitutional showdown with the national government in Madrid and the potential for mass unrest.

Before signing the declaration, Puigdemont told the Parliament in Barcelona, “I assume the mandate that Catalonia should become an independent state in the form of a republic.”

He added, “I propose suspending the effects of the declaration of independence to undertake talks to reach an agreed solution. The conflict with Spain can be resolved in a negotiated way.”

His calls for talks through an international mediator were rejected by Spanish Deputy Prime Minister Soraya Saenz de Santamaria.

“Neither Mr. Puigdemont nor anybody else can claim … to impose mediation,” she said.

French President Emmanuel Macron rejected Puigdemont’s call for European Union mediation, saying he was confident Madrid could handle the situation, in a stance echoed by other EU leaders. The EU has made it clear that should Catalonia split from Spain, it would no longer be part of the EU.

Puigdemont was booed by supporters of Catalan independence after the announcement.

“I am disappointed. I hoped for a declaration of independence and it didn’t happen,” said 18-year-old student Julia Lluch, in a crowd of independence supporters who were rolling up their flags and drifting away from the assembly.

According to the London Times, the Spanish authorities have been considering imposing direct rule on the region by invoking a special clause in the constitution. With tensions already high after 800 people were injured as police intervened to stop the referendum, such a move could provoke a large-scale backlash.

The Catalan government said 90 percent of those who voted backed independence, however turnout was only 43 percent as many opponents of independence stayed at home.

Opinion polls before Oct. 1 suggested a minority of around 40 percent of residents in Catalonia backed independence.