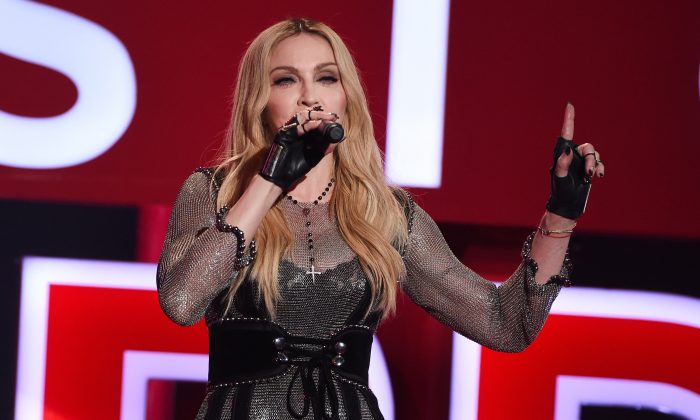 Singer Madonna during the 2015 iHeartRadio Music Awards at The Shrine Auditorium in Los Angeles on March 29, 2015. (Kevin Winter/Getty Images for iHeartMedia)
Entertainment

LILONGWE, Malawi—Pop star Madonna on Wednesday denied a report that she filed for the adoption of two more children from Malawi.

Madonna said she was in Malawi for charity work, contradicting Mlenga Mvula, a judiciary spokesman in the southern African country who said the singer appeared before a High Court judge about the adoption issue on Wednesday.

“I am in Malawi to check on the children’s hospital in Blantyre and my other work with Raising Malawi, and then heading home,” Madonna said in a statement. “The rumors of an adoption process are untrue.”

There was no immediate explanation for the discrepancy between the conflicting accounts.

The Associated Press was unable to reach Mvula by telephone late Wednesday, after Madonna’s denial. Earlier, Mvula said he had an adoption file with details on the children, and he also told national television that Madonna wants to adopt two more children.

The Nyasa Times, a newspaper in Malawi, reported that Titus Mvalo, a lawyer for Madonna, said she is trying to adopt two more children. The newspaper said its court correspondent spotted Madonna and Mvalo at the court in Lilongwe, Malawi’s capital.

The pop star in 2006 founded the charity Raising Malawi to address the poverty and hardship endured by the impoverished country’s orphans and vulnerable children.