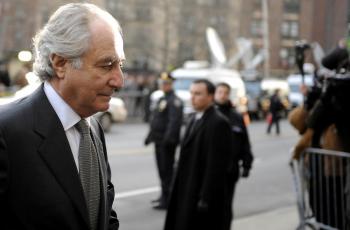 FRAUDSTER: In this file photo dated March 2009, Bernard Madoff is seen at a federal court in Manhattan in New York City. (Stephen Chernin/Getty Images)
US

By Mimi Li
Print
A federal bankruptcy court judge approved on Thursday a $7.2 billion Madoff settlement to be paid to victims of the jailed Ponzi scheme manager, according to Reuters.

The settlement comes from the estate of Jeffrey Picower, a friend and investor of Madoff’s, and was spearheaded by his wife Barbara Picower along with the US Department of Justice and Irving Picard, a trustee for the Madoff firm.

Jeffrey Picower died in October 2009 at the age of 67 from a heart attack.

The settlement was green-lighted by US Bankruptcy Judge Burton R. Lifland of New York and raises the amount that Madoff victims have recovered to $10 billion, which is about half of what all victims lost in Madoff’s Ponzi scheme fraud.

Judge Lifland cleared the reimbursement despite objections from a group of Madoff victims who claimed the settlement would prevent them from potentially pursuing more money from the Picower estate, according to the Wall Street Journal.

Bernie Madoff, 72, is currently serving a 150-year jail term for defrauding thousands of investors in a multi-billion dollar Ponzi scheme.