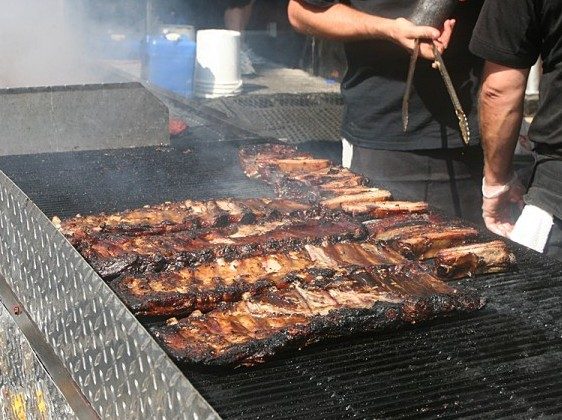 NEW YORK—Madison Square Park transformed into a deluxe barbecue center over the weekend. Rows of tents and smokey grills, with top southern chefs from around the country, filled the streets surrounding the park.

Sarah Steinfield attended the 10th Annual Big Apple Barbeque Block Party for her first time on Saturday: “This is something neat and different. … It’s one of the cool things about being in New York,” she said.

Baker’s Ribs, a family-owned barbeque shop from Dallas, Texas, was at the Madison Park event for its sixth year in a row.

“There’s not a lot of time to get out and enjoy [this type of event],” said Joe Duncan, manager of Baker’s Rib. “It’s a lot of fun.”

“There’s nothing like feeding New Yorkers barbecue. … Something they don’t get all the time,” said Duncan’s son-in-law Jason Livingston.

Chris Hastings, winner of this year’s James Beard Award for Best Chef in the South, imparted his oyster cooking wisdom on Sunday. He showed food lovers how to bake oysters with ingredients such as lime and jalapeno, to bring out an Alabama oyster flavor.

Despite prepaid Fast Passes that were designed to allow shorter waits for customers, some were not happy.

“The Fast Pass lines were frequently much longer than the regular lines today,” a customer posted on Facebook. “You killed the goose that laid the golden egg and sold WAY too many Fast Passes.”

The proceeds from the barbecue block party each year are donated to the Madison Square Park Conservancy, a nonprofit organization that maintains the park.

“Big Apple Barbeque has become a tradition here at Madison Square Park, eagerly anticipated every year by the New York City community,” said Tom Reidy, the chief operating officer of the conservancy. “The proceeds donated to the conservancy are used to help clean, beautify, secure, and program the park the rest of the year. We are incredibly appreciative of the support.