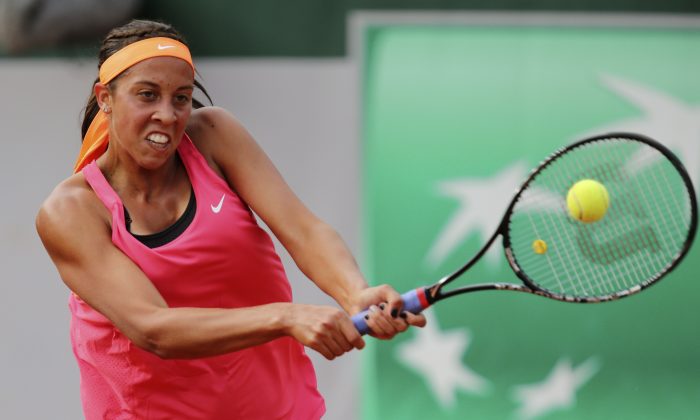 Madison Keys at the French Open earlier this year, will play in the Aegon International final on June 21, 2014. (AP Photo/David Vincent)
Sports

The match will be broadcast delayed on the Tennis Channel in the United States, starting at 12:30 p.m. EDT.

The match will be broadcast on BBC2 and Eurosport in the United Kingdom. Highlights will be played on Eurosport starting at 7:30 p.m.

Live streaming will be available through BBC, Eurosport, TennisTV or the WTA.

It’s the first WTA final for Keys, at 19 years old the youngest player in the top 50. She fought off three break points before taking the opening set with a single break.

“I definitely think I served well … (it) got me back in some games,” Keys said. “Then I think I just returned well a couple of games, and that was really the match.”

Kerber, who finished as runnerup to Tamira Paszek in 2012, challenged her Danish opponent throughout the match which featured fiercely contested baseline rallies.

Kerber held a set point at 5-4 before winning the last six points of the tiebreaker to claim the second set, and in the third she finished strongly by sweeping five of the last six games.

Wozniacki’s engagement to golfer Rory McIlroy ended last month. After Friday’s match she said: “You know, sometimes life throws you things that you didn’t expect, but you just have to embrace it and move forward. It makes you stronger. I’m in a good place right now.”

On the men’s side, top-seeded Richard Gasquet of France and defending champion Feliciano Lopez advanced to the final.