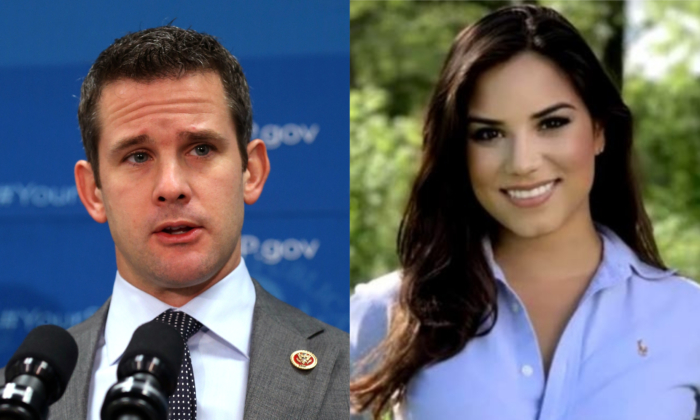 “America faces a tough choice in 2022, a choice between electing voices for all the people or voices for only the powerful,” Cawthorn, a freshman Republican congressman from North Carolina, told media outlets in a statement.

“Establishment hacks, who prioritize the approval of CNN, Nancy Pelosi, and radical Democrats in Congress have more in common with socialist activists than American Patriots,” he added. “Elected officials who side with Pelosi and sideline the American people, have no place in the Republican Party.”

In endorsing Lauf, Cawthorn said Kinzinger, a Trump critic, “has no place in the Republican Party.”

“I am the first to condemn D.C. insider Kinzinger and the first to endorse a powerful America first, political outsider, in Catalina Lauf. I assure you I will not be the last,” Cawthorn said. “She is dedicated to working for, not against, the interests of the people of Illinois, and I know that she will be a powerful fighter in Washington.”

“The day of the pandering politician is over, it is time for American lions to rise,” the congressman added. “And in 2022, this nation will hear the roar of freedom.”

The endorsement comes as, Kinzinger who was asked to serve on the Select Committee to Investigate the January 6th Attack on the U.S. Capitol by House Speaker Nancy Pelosi (D-Calif.), faces backlash from fellow party members for participating in the panel.

The Illinois representative said last week that the panel would allow lawmakers to provide a transparent look into the Jan. 6 Capitol breach, echoing claims from Democrats that it was an “attack on our democracy.”

“This is a very Trump Republican district. So now he’s in a fight, because we’re coming in, we have the resources and then we have the groundswell of support to be challenging him,” she told The Epoch Times in March.

Responding to Cawthorn’s endorsement, Lauf said in a statement on Twitter that she is “honored” to have his support.

“@CawthornforNC has been a fearless conservative leader and a fighting voice the American people desperately deserve,” she wrote. “I look forward to advancing our shared values beside him in Congress.”

Kinzinger didn’t immediately respond to a request for comment by The Epoch Times.