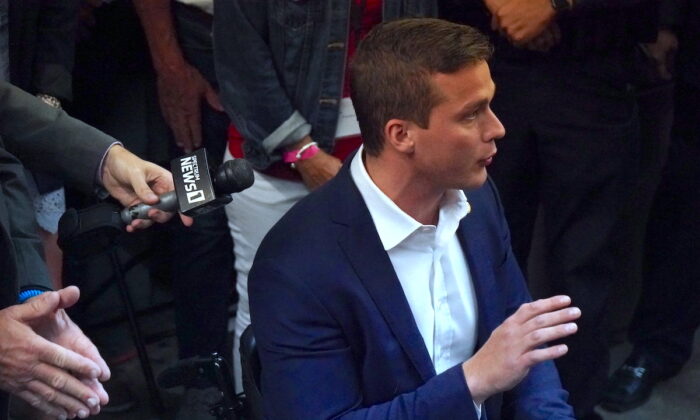 Minutes before conceding, Rep. Madison Cawthorn announces that he is confident of victory in Hendersonville, N.C., on May 17, 2022. (Jackson Elliott/The Epoch Times)
2022 Midterm Elections

“While I was out here speaking with you all, Congressman Cawthorn called Rep. Edwards to concede the race,” Ball told members of the media at Cawthorn’s election watch party.

The announcement closed an extremely close race. For most of the night, Edwards led Cawthorn by only a few percentage points.

Despite the race’s closeness, both Cawthorn and several close friends of his said they were confident of his victory. Their certainty held steady until the last moment.

Frank Burkett, a family friend of Cawthorn’s, had two cigars in his pocket that he said he would smoke after the candidate’s victory. Despite his words, he also said he was waiting in suspense.

“We all love him,” he said of Cawthorn.

Burkett was part of Cawthorn’s 2020 campaign too, and a member of an informal group of Cawthorn’s friends called “The Four Horsemen.” Each member of the group had a metal medallion, with Cawthorn’s campaign logo on one side, and four stylized men on the front.

“We protect Madison,” said Jim Andrews, a former Marine and member of the group.

But it seems the “Four Horsemen” couldn’t protect him from the impact of a series of negative news stories that have broken over the past several weeks.

Cawthorn has been accused of sexual misconduct, photographed wearing women’s lingerie, detained for attempting to bring a gun into an airport, and accused of insider trading.

Cawthorn said he blames the cascade of bad press on Republicans.

“This is a coordinated strike carried out by the old establishment within your own party. It’s a loser’s mentality,” Cawthorn said.

Cawthorn also thanked former President Donald Trump for endorsing him even after the negative stories hit the public.

Andrews and Burkett both said the photos from Cawthorn’s youth were nothing to worry about, but both men brought up the subject without being asked.

“It’s all boyhood,” said Andrews. “All of it happened long before Madison went to Congress.”

He added that as a young man, he played jokes that would have come back to bite him had they been caught on camera and posted online.

Burkett said that voters should focus on national issues, not on news stories on Cawthorn. He added that Biden’s policies have made America worse off.

“I could run against him and win,” he said of Biden.

But several North Carolina voters said that the series of Cawthorn news stories persuaded them not to vote for him.

Despite the apparent confidence in Cawthorn’s victory earlier in the night, guests seemed on edge.

Although barbecue and cupcakes waited for the many election watch party guests, only a few guests ate. The conversation was quiet as Edwards took the lead early. Guests continued to watch the polls as Cawthorn’s numbers rose.

For the vast majority of election night, Cawthorn himself stayed in a closed room. A television screen with polls on it was visible when the door occasionally swung open.

At a 9:50 p.m. press conference, Cawthorn said he was confident of victory, and greeted supporters eagerly.

Barely a half-hour later, he had conceded.